Emma Roberts shines in a haunted house movie that, like the titular abode, soon shows its age. 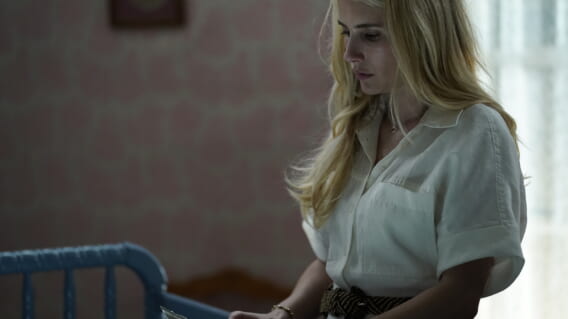 If you’ve seen a ghost story before– quite literally any ghost story– then you’ve seen Spencer Squire’s Abandoned. Less The Conjuring, more The Disappointments Room (if anyone remembers that one), Abandoned squanders an admittedly fantastic Emma Roberts and some stunning scenery for woman-in-peril haunter audiences have seen one dozen times over.

Roberts finally gets a Murder House of her own as Sara, a new mother grappling with post-partum psychosis who, alongside husband Alex (John Gallagher Jr. playing the same role he did in 2020’s Come Play), moves to the country to escape city life. Sara is unmedicated, not wanting to jeopardize her ability to breastfeed, the only thing she feels creates a genuine bond with her infant son. It’s an admittedly poignant thread, one where Roberts gamely balances vulnerability with myopic naivety, especially as the haunting starts in earnest.

Sara, Alex, and the audience are clued in early that a horrible crime has been committed in the house. But, Sara herself remarks never minding a little haunting. The minutiae of their home purchase is a stickler’s delight. It’s replete with incredulous choices and odd details some character, any character, should have noticed as odd. There are graphic crime scene photos included in the history report just because, and despite assurances the house had been thoroughly cleaned, Sara and Alex repeatedly stumble upon detritus from the previous owners. While it later ties into the plot, neither question the integrity of a realtor who ostensibly sold them a home no one’s looked at. This curious beat, of course, is compounded when they discover a locked bedroom in the house, one neither knew was there.

Hauntings are rendered with effective, jolt-worthy sound design, and they work, but the emotional efficacy is never there, despite how hard Roberts tries, and succeeds, at selling Sara’s inner turmoil. It’s less Roberts, more the rough outline of Sara herself, a character whose key traits seemed pilfered from a WebMD article on postpartum psychosis, with nothing else there to texturize her as a dimensional, fully lived-in character. There are nods to her past job as a teacher, though all the audience sees of Sara are scenes of her wandering the house in the same white dress (I kid you not, days pass and Sara doesn’t change once), feeling sufficiently spooked by something, and then sitting down with Alex for dinner after he returns home.

A jump scare or two energize the proceedings, though it amounts to so little when no care is paid to sustained tension. Abandoned isn’t even all that interested in coyly tricking the audience into thinking it all might be in Sara’s head, especially when the rules of its supernatural specters are so hazily assembled. The ending is so confoundingly abrupt and jarring that it retroactively renders every antecedent scare the worse for it.

Every haunted house trope is there. There’s a soundtrack with some solid licensed tracks played in conventional, ghost story fashion on a record player, a frightening music box, and childish laughs in the middle of the night. Michael Shannon pops up a handful of times to spout exposition. But even his character feels like an afterthought, introduced as a key player who disappears for almost the entirety of the third act.

Abandoned has a solid premise at its core, and Roberts is comfortably at home working in the horror space. Whatever emotional anchor Abandoned has, it’s owing almost entirely to Roberts elevating the material at every possible turn. There’s a nugget of truth within as it explores the complexity of motherhood, mental illness, and the insidious rabbit hole of ostensibly losing one’s mind, and it’s earnest enough to warrant some goodwill. Squires never exploits or opts for cheap tactics. While there’s something commendable to be said of that, all the good intentions in the world cannot compensate for a lack of, well, anything. Abandoned’s saving grace is Roberts, though without her, the movie ends up resembling a production where logic, scares, and interest were themselves abandoned halfway through.

Emma Roberts shines in Abandoned, a haunted house movie that, like the titular abode, soon shows its age. Been there, haunted that.