Get excited for this electrifying horror comedy. 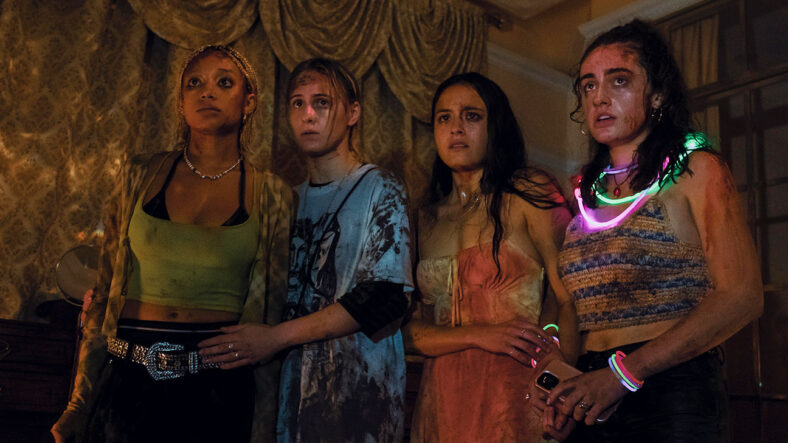 Fans of HBO Max’s smash hit Euphoria may have a new obsession when Bodies Bodies Bodies arrives in theaters later this year. Both combine a drugged-out youth culture taking advantage of their wealth and privilege. That feeling of indestructibility is such a fundamental part of being young. Another important part of growing up is knowing who your friends are. In director Halina Reijn’s compelling chamber piece, a night of excess leads to distrust among an elitist group of 20-somethings who mistakenly think they’re besties.

Murder mystery parties have always been around. But we tend to think of them as drab dinner theatre. Inspired by roll playing games like Mafia and Werewolf, the game played here is much more violent in nature. Trapped in a mansion during a hurricane party, a guessing game starts by slapping the person next to you and taking a shot. All seven participants seem to take it with stride until comments about who the “murderer” is start to get personal. Then, real bodies start piling up causing paranoid delusions and even more truth-telling.

The electricity between the five female leads completely elevates a premise that could’ve easily been turned into a middle-of-the-road genre film. Amanda Stenberg (The Hate U Give) and Maria Bakalova (Borat) are fantastic together as a newly fledged couple that haven’t completely figured each other out yet. Chase Sui Wonders is also pitch perfect as the quiet one who becomes an early suspect. Myha’la Herrold (Industry) and Rachel Sennot (Shiva Baby) stand out in a big way, offering up hilarious one-liners and threatening accusations that destabilize the entire group. Their dynamic together ignites a powder keg of emotions that sends Bodies Bodies Bodies into the stratosphere during some of the film’s bigger conflicts.

Director of Photography Jasper Wolf moves the camera in and out of the group making it feel like anyone could be the potential focal point. The raw performances make you feel like you’re in on the action, trapped along with them as another scared house guest. Wolf also captures the intimidating energy coming off of Lee Pace (Guardians of the Galaxy) who is wildly and wonderfully unhinged.

It also doesn’t hurt that Reijn comes from a hugely successful acting background and wasn’t afraid to get down into the blood and mud alongside the cast. Pete Davidson, playing a rich kid version of himself, also looks inspired to be a part of this rare ensemble of talent. Most of the actors even did their own lighting with iPhones, head lamps and glow sticks that kept them on their toes once the power goes out.

Also Read: ‘Deadstream’ Is A Nasty and Hilarious Second-Screen Horror Featuring An Annoying Influencer and One Nasty Ghost [SXSW 2022]

The story by author Kristen Roupenian, who first gained notoriety for her New Yorker short story “Cat Person,” takes its big swings during just the right moments. Screenwriter Sarah DeLappe was also a finalist for the Pulitzer Prize for Drama in 2017. DeLappe demonstrates an uncanny knack for writing dialogue for millennials that feels natural without becoming too weighed down with cliched buzz words. Terms like agency, gaslighting and toxicity are introduced by characters that are living with these descriptors even when they don’t fully understand them.

Best known to horror fans for his work on It Follows, Disasterpiece drops in a complementary score that he describes as an “evil puppet master” helping to control the chaos. The sounds work to punctuate a piece of dialogue instead of bearing down during the scarier moments. The murders exist mainly to cause more confusion and the music never oversells the kill count.

Fake friends will stab you in the back a lot faster when a misguided game turns deadly. The characters find out all too quickly that their wealth and privilege does little to help them navigate the central mystery. What they perceive as clues just turn them back against each other. Maybe they’d all be better friends if they started liking each other instead of each other’s social media posts. At its core, Bodies Bodies Bodies is a detective story without a detective.

A lot of horror fans are going to be talking about the stellar cast of Bodies Bodies Bodies when it drops later this year. Consider this one now firmly planted on your radar.