‘Alpha Rift’: A Fantasy Quest Worth Embarking On 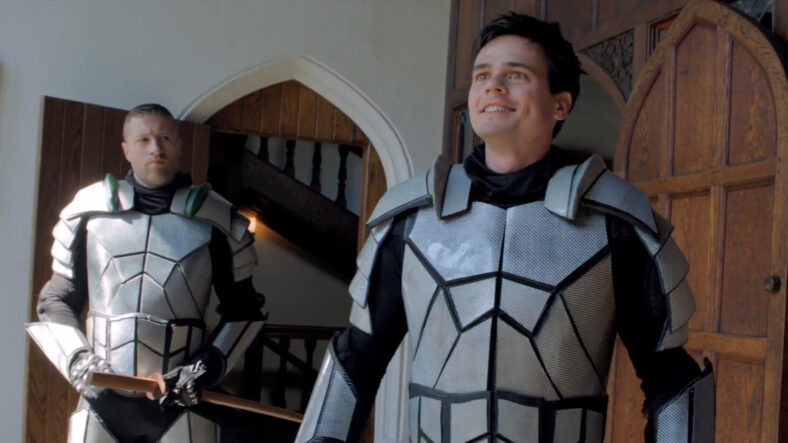 While it was clearly produced on a modest budget, the new fantasy action film Alpha Rift from writer and director Dan Lantz is still a gratifying magical romp. It’ll appeal to anyone whose idea of a perfect day off is playing through six sessions of Dungeons and Dragons.

Aaron Dalla Villa stars as Nolan Parthmore, a fantasy-obsessed gamer who works in a tabletop role-playing store. With this being a sword and sorcery epic (albeit a much cheaper one than most viewers are probably used to seeing), Nolan soon learns that he is descended from the bloodline of a sacred group of warriors known as the Noblemen. He’s destined to defeat an ancient demon known as Lord Dragsmere. What follows is a long section in which Nolan is trained by Noblemen leader Corbin (Lance Henriksen) and seasoned warrior Vicars (Graham Wolfe).

Related: Exclusive: Lance Henricksen Talks Monday at 11:01 AM and More!

Alpha Rift certainly takes a while to get where it needs to go. But the dedicated performances of the cast helped to make the prolonged training sequences more enjoyable than they would have been otherwise. Henriksen is a particular standout. The Aliens actor was apparently unaware that he was appearing in a somewhat tongue-in-cheek fantasy adventure. He delivers most of his lines with such a deeply serious and passionate gravitas that you would think he was aiming for an Academy Award.

One of the most enjoyable aspects of Alpha Rift is watching sword duels between actors wearing silly knight costumes which look like they were purchased at the local Dollar Tree. Meanwhile, Henriksen solemnly monologues about how his organization has been training warriors for centuries. They’re the sworn protectors who prevent the world from falling into darkness and chaos. What makes Henriksen’s straight-faced performance even more entertaining is that most of the other actors seem to actually be having fun with their roles instead of taking things too seriously. This creates a clear onscreen, and hilarious, contrast between the performers.

Related: ‘Pumpkinhead’: The End of an Era

As the central protagonist, Dalla Villa is also likable as Nolan. He sells the character’s transformation from a D&D-obsessed nerd into a hardened warrior somewhat convincingly. But it’s still hard to take the goofy knight costumes seriously. Either way, Nolan is still a strongly written protagonist who proves once and for all that nerds really can be cool.

Because the filmmakers were also clearly going for a superhero vibe, Nolan is also given an ancient knight’s helmet. This significantly heightens the senses and reflex actions of those from the Noblemen’s bloodline. Basically, he gets superpowers. And we were treated to some fun action sequences depicting Nolan and other characters fighting bad guys with their swords. However, the PG-13 rating means that green CGI mist sprayed from wounds instead of blood each time someone was impaled.

Alpha Rift has some issues with pacing. After the endless scenes of Nolan’s training, there’s a long sequence where Nolan chickens out and goes back to trying to live a normal life with his on/off girlfriend Gabby (Rachel Nielsen). That time could have instead been used to develop Lord Dragsmere as a character and help us to understand why he’s such an evil character who needs to be stopped at all costs.

While Lord Dragsmere is frequently described as being some kind of unspeakably evil being, he doesn’t actually do much in the film. He really just possesses the body of a crook and delivers sarcastic quits about how much he loves the 21st century. Almost all of Dragsmere’s scenes took place inside a restaurant, as though the actor was only available to film in one location. The film really falls short when it comes to selling us its villain. At least Nolan is depicted as a convincing protagonist who genuinely wants to do the right thing when he finally confronts Dragsmere in the third act. This leads to a satisfying showdown between the young knight and the ancient demon.

Speaking of characterization, it also needs to be said that while there is a relatively minor supporting character who was depicted as a complete socially-awkward nerd, the film thankfully did not lean too heavily into the stereotype of fantasy RPG gamers having poor social interaction skills.

Alpha Rift was clearly made to appeal to fans of Dungeons & Dragons and similar fantasy role-playing games. Although more casual viewers might be a little confused by all the references and throwbacks to the fantasy genre, they will still no doubt enjoy the fun action scenes and the dedicated performances, particularly from Henriksen and Dalla Villa. So regardless of your level of affection for the fantasy genre, Alpha Rift is still an epic quest worth embarking on.