FilmQuest Review: Come For the Laughs, Stay For the WTF Moments in ‘Keeping Company’

Devin Das and Josh Wallace's debut feature is a solid workplace dark comedy that's not afraid to get its hands a little bloody. 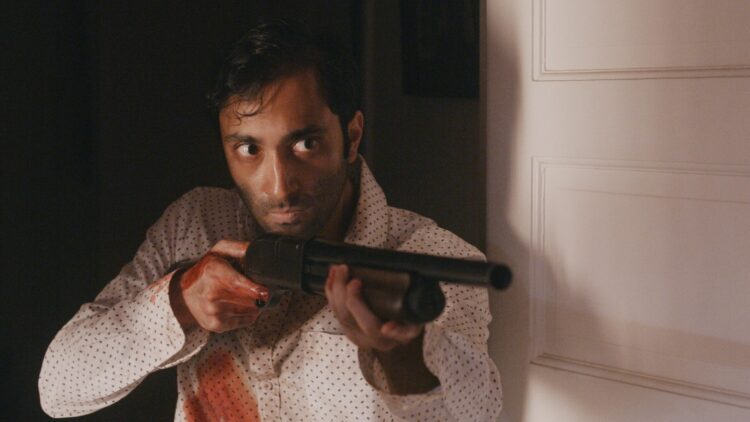 When two insurance salesmen find themselves trapped in a serial killer’s basement, things can only get weirder from there. Keeping Company feels like an in-joke between friends who keep playing off of each other to see how off the rails they can go. This makes sense, because both writers, Devin Das and Josh Wallace, are friends who decided to make their first feature together.

This movie starts with us meeting Sonny and Noah (Das and Ahmed Bharoocha), an insurance sales team with completely different views on work, life, and even if they are friends or not. Sonny is kind of the jaded half, who’s willing to do anything to succeed and can’t be bothered with details that might derail him from achieving his goals. Noah, on the other hand, is the annoyingly optimistic half of the duo who keeps showing everyone he meets a picture of his pregnant wife. They’re an odd couple, for sure.

Things get even weirder when they push their way into the home of Lucas (Jacob Grodnik), a serial killer living with his grandma (Suzanne Savoy), who is also up to no good. Our duo finds themselves locked in a basement together for over a week and presumed dead.

All of this sounds much more serious than it is.

Keeping Company feels like one of the better NBC sitcoms, if it had added an element of murder and cast Brown people in leading roles. Imagine if two of the supporting characters from The Office went out to Dwight’s beet farm on the wrong day, and this is where this movie lives.

The movie takes completely surprising turns on its way to an ending you probably won’t see coming… even though it makes complete sense. Keeping Company understands that it lives in the world of dark comedies and does not shy away from getting its hands a little bloody, or grossing out the audience.

In the Q&A after the film screened, Das and Grodnik mentioned how pleasantly surprised they were that FilmQuest’s Utah audience was the first to laugh at some of the much darker humor found later on in the film. It seems some other festival audiences were not as easily able to laugh after a few surprising and serious moments that lead us to find out what Grandma’s deal is. That familial unit has a lot of problems that are possible where the darkest humor of the film stems from.

The movie is easily another solid entry in the workplace dark comedy genre, alongside Mayhem, Slaxx, and others that Girl, That’s Scary recently highlighted on their Dread Central podcast. Come for the easy laughs and stay for the WTF moments in this uniquely offbeat movie.

Keeping Company had its regional premiere at FilmQuest 2021.

Keeping Company is like an NBC sitcom, but with murder. For people who love dark comedies and wished that Chuck or The Office were bloodier, Devin Das and Josh Wallace’s debut feature is worth seeking out.