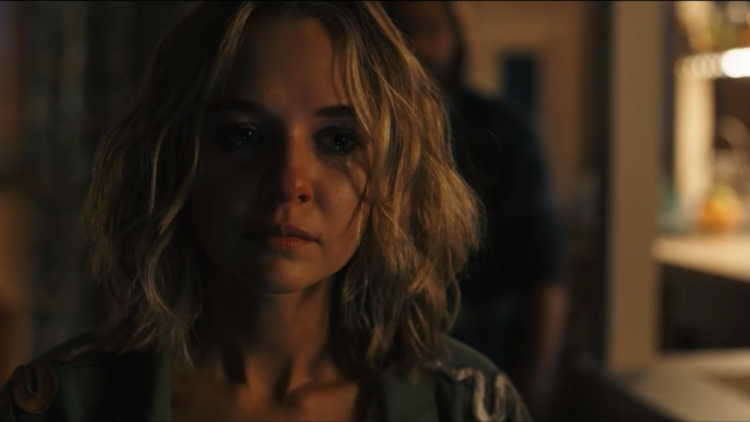 Each week Joe Lipsett deep dives into a spoiler-filled review of the latest episode of Amazon Prime’s I Know What You Did Last Summer. This week: episode five, “Mukbang.”

In the wake of Office Cruise and Harold’s murders at the end of episode four, Sheriff Lyla (Fiona Rene) and new character Officer Lonnie question everyone in town. The OG crew – Allison-as-Lennon (Madison Iseman), Margot (Brianne Tju), Riley (Ashley Moore), and Dylan (Ezekiel Goodman) – think they know who is after them and hunt for evidence implicating Clara (Brooke Bloom), the town eccentric.

“Snak ‘n Stuff” opens with a lengthy sequence where Margot binges sweets in her bathroom while crying on camera. It’s an uncomfortable scene, not just because of the close-ups of Margot’s tears; but also because it goes on for so long. Margot’s relapse contradicts her mother’s overly simplistic statement that eating disorders are “dealt with in therapy”. But there’s a gratuitousness to the way I Know What You Did Last Summer lingers on her suffering.

Despite this, Margot is fast becoming the most sympathetic character on the show. While she does still have moments of high bitchery (matched only by Cassie Beck’s Courtney), Margot’s unreciprocated romantic feelings for Lennon and the fact that she is the only person who grieves humanizes her. It should be noted that writer Gary Tieche also gives Riley a good moment when she confronts Dylan about the growing rift in their friendship, though the teen drug dealer is still underdeveloped overall.

Unfortunately Iseman’s performance continues to be a problem for the series. From a writing standpoint, Allison lacks depth, but, aside from Allison’s tendency to smoke, Iseman’s twins remain indistinguishable. In fact, the moment in the flashback when Bruce mistakes one twin for the other feels like the show inadvertently acknowledging the problem.

One unexpected development is the rise in prominence of the island’s mysterious cult. In previous episodes, there have been brief mentions about cult members who died by suicide in the caves where Lennon’s body was left. As the OG crew investigates Clara’s home, they discover a number of spooky objects and artifacts. They also find a pretty damning photograph that reveals that Bruce has been lying to Allison. In true slasher tradition, rather than confront her father and clear the air, Allison packs a bag and heads to Margot’s house for emotional and physical refuge.

Another unusual plot revelation comes courtesy of the medical examiner (and Officer Lonnie, the expert Googler). The spiders discovered in Johnny’s decapitated head are not local. It turns out they are Wolf Spiders, a foreign species that hails from the Arctic and feasts on brain matter. (Fun fact: according to this CBC story, wolf spiders are “the most abundant predator in the Arctic. [They] eat more creatures than polar bears or wolves”).

There’s a clear connection to Clara when Dylan observes the same spiders feasting on rat brains in one of her spooky houses. But it remains unclear why Clara is importing these arachnids.

Last week I lamented the lack of chase scenes and set pieces. I Know What You Did Last Summer’s stubborn refusal to show more than the killer’s arm means that we’re still batting zero on the former. But “Mukbang” does dedicate a substantial part of its runtime to the teens’ exploration of Clara’s creepy properties.

That and the motion sensor lights that threaten to expose everyone are good fun. There’s even a genuine jump scare when Dylan grabs Allison before she can be discovered. This section is definitely the show’s most successful horror sequence since Johnny’s murder back in episode two.

The investigation at Clara’s house – and the episode itself – ends ambiguously. It’s very clear that both Margot and Allison have escaped unscathed. But there’s some uncertainty about whether Dylan was shot when he and Allison leap over the wall.

“Mukbang” ends with the tease that someone met with the sharp end of Checkov’s machete; not only is there a trail of blood leading into the woods next to the weapon, but an unseen individual is heard crying on the soundtrack. To my ears, it sounds like a woman; so either Clara or Riley, but which one?

Where do we go from here? Clearly, Allison and Bruce will have to address the elephant in the room, and the cult will likely become even more significant. There’s a lot of potential here because the details have been so sparse. Who else aside from Bruce and Clara was involved? Did anyone else survive? What did the group actually do? Is there a supernatural element to this?

Turning our attention to the killer, at this point the likeliest culprit is Clara, simply based on her connection to the wolf spiders. Any good slasher worth its salt would introduce this as a red herring, though. So my money is on Clara as the machete victim.

So who’s the killer? Considering the new information we learn about Bruce, my money is on either him or Dylan. We’ll see if I’m remotely close next week in “Least You Had A Spare.”

I Know What You Did Last Summer streams Fridays on Amazon Prime.

Tags: I Know What You Did Last Summer