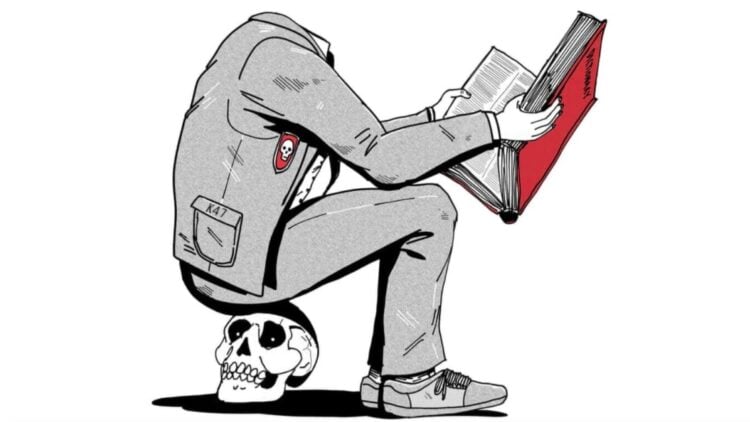 Several years after he impressed readers with his debut anthology The Rook Circle, Houston Press writer Jef Rouner has returned to the horror scene with Stranger Words, a new collection of short stories which are bound the chill the bones of even the most hardcore horror fans.

Another entry which made a significant impact is Earworm. The story focuses on a film student named Yashimabet who uncovers a chilling song called “Emily,“ which causes anyone who listens to it to suddenly and desperately want to physically harm themselves. Upon investigating the source of the sinister music track, Yashimabet soon uncovers that it was written by an artist called Parson Russell, who does not seem to actually exist. Regardless of the song’s mysterious origins, Yashimabet desperately tries to stop her fellow student from listening to “Emily,“ until she learns that one of her classmates sent it to all the residents of their dormitory. The ending of Earworm is particularly shocking, since mass suicide will never be an easy topic to address, even in fiction. This is possibly the most harrowing story in the entire volume, and you certainly won’t be forgetting it in a hurry.

Just a Kiss Away is one of the more unusual entries in the anthology, as it depicted a lonely male divorcee who spends an unhealthy amount of time at his local strip club, where he starts to develop feelings towards a headless stripper named Dolly. Some magic realism is sprinkled in throughout this story, as Dolly’s headlessness is explained as a rare medical condition which everyone seems to accept without questioning the impossibility of the situation. I’m pretty sure this particular entry is meant to highlight the hopelessness of depression, as Tomas sees no way out of his situation. But as he starts to develop feelings toward Dolly, Tomas starts to finally become his old self again, and Just a Kiss Away ultimately serves as a reminder that no matter how bad things get, there will always be a light at the end of the tunnel.

It’s always great to see inclusion of the LGBTQ+ community, so Rouner should be praised for the story Sleep Deprivation, which features a gay protagonist named Joden. But the story itself is far from upbeat, as it primarily deals with the theme of loss, with Joden struggling to come to terms with the death of his partner and the insomnia he’s been suffering from due to his grief. Joden eventually decides to use a speaker to fill his apartment with the sounds of his deceased husband’s daily routine. This sadly angers his seemingly tolerant neighbor, who resorts to taking drastic measures so that he can finally have a good’s night sleep. Once again, this entry features a downbeat conclusion, making it a somber tale of grief and a reminder that in real life, there are no happy endings.

On the other hand, Rouner is also not afraid to tackle the topic of racism, with Flood God telling the story of an ignorant security guard named Kyle, who begins to suspect his dark-skinned neighbor Jiyu of causing a devastating storm which devastates the neighborhood. Jiyu keeps an alligator trophy in his home, which Kyle thinks his neighbor must be using to magically summon the storm, and even after Jiyu saves his neighbor’s life, Kyle still views him as an enemy who needs to be stopped. I won’t spoil the ending, but I will say that Kyle gets what he deserves for being a racist asshole, and readers will no doubt be satisfied.

And speaking of alligators, another entry in Stranger Words called The Alligator Principle describes a teenager internally debating whether he will be able to rescue his boyfriend, who jumps into alligator- infested waters. He eventually comes to the conclusion that it will be up to the alligators to desire whether his boyfriend lives or dies. and I think Rouner is trying to create a Schrödinger’s cat-style analogy here, but I’m not sure what I was supposed to take away from The Alligator Principle. It was nice to have another gay-themed entry, but this tale was a little too weird for me.

On the other hand, generalized anxiety disorder is a condition which is rarely given any representation, so Rouner should be praised for featuring a character with GAD in Just Up the Sweet and Back, a Halloween-themed story also included in Stranger Words. The protagonist, DeQuinan, constantly worries over things which others would probably take no notice of, and it was a nice touch to have all the names and nouns in the sections told from DeQuinan’s point of view to be written in small caps, to emphasize how he obsesses over minor things. We soon learn that DeQuinan has a very real reason to be worried, however, as an ancient and malevolent entity might just be waiting for trick-or-treaters in one of the houses on his street. This was a fun entry which highlighted a condition which is too often ignored, and hopefully it will make readers more understanding of the difficulties of living with an invisible illness.

While most of the stories described so far are somewhat bleak in tone, Rouner is sure to sprinkle in a healthy dose of humor with New Game+. In that story, a deceased young man named Hewer finds himself in Hell, where he agrees to be tortured continuously by appearing as an enemy character in a video game so that he can be killed by players over and over again. It’s particularly amusing to read about the Devil being depicted as a polite boss who actually seems to respect his subordinates. Who would have thought that serving the Lord of Darkness would have its perks? Anyway, it turns out that Hewer feels remorse for the sins he committed during his time on Earth, and that he actually wants to use his eternal damnation to make a positive difference in any way he can. The lesson, here, is that good can always come out of the bad, and that’s driven home when Hewer notices holes in the palms of the Devil’s hands, suggesting that Satan may have once fancied himself as humanity’s savior. As a hardcore gamer, I also enjoyed all the Easter eggs sprinkled in throughout New Game+, with everything from Bioshock to Goat Simulator getting a nod.

With Stranger Words, Rouner delivers a strong selection of memorable and disturbing horror stories. He deserves particular praise for his commitment to inclusivity and diversity, and his determination to highlight the dangers of prejudice and intolerance. Although this book will no doubt terrify readers, it will also hopefully help us to understand the difficulties many people face simply for being different, and this is something which always needs to be highlighted. Rouner clearly understands the importance of the horror genre and how it can speak to people in a way other kinds of stories can’t, and he expertly puts his skill to use to both entertain and inform readers with this anthology. Stranger Words certainly earns its place on the bookshelves of horror fans. After all, where else are you going to find a story about a guy whose dick mysteriously vanishes into thin air?

Stranger Words was a bone-chilling anthology which emphasised the difficulties many people face because of their differences, making it a memorable and relevant collection of horror stories which readers should seek out immediately.