TIFF Review: ‘You Are Not My Mother’ Makes Folktales Frightening 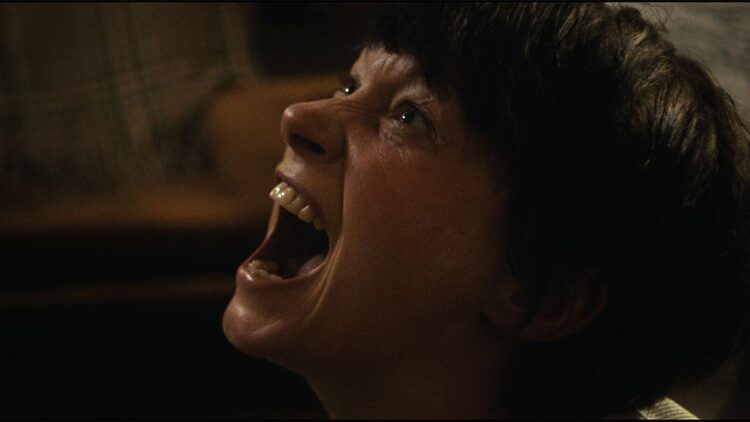 
You Are Not My Mother is a movie that scares on the periphery. No different than many of its indie horror brethren, You Are Not My Mother’s haunts are more suggestive and evocative than anything Blumhouse or Warner Bros. is releasing these days. There’s integrity to restraint, whether by dint of budget or narrative fidelity, though at times, it veers frustratingly close to inconclusiveness. Kate Dolan’s debut feature, though tremendously frightening in parts, is a good movie masquerading as a great one. There’s something incredibly promising here, though like the changelings at the movie’s center, it appears to have been swapped out.

After a suggestive occult prologue where an infant is placed in the middle of runic symbols and then set ablaze, You Are Not My Mother jumps forward several years. That child, named Char (Hazel Doupe), is now a teenager. Still bearing the burns on her face– though she’s been told they’re simply a birthmark– the roots of her trauma run deep. Her mother, Angela (Carolyn Bracken) is practically catatonic, frequently passed out in bed, and uncommunicative. Like the metaphoric monsters that have nestled deeply in the horror genre, it’s clear from the first frame that the literal monsters of Kate Dolan’s debut are themselves masquerading as specters of conditions far more troubling– mental illness. Char coaxes her out of bed long enough to secure a ride to school, but after a near-accident, Angela remarks that she simply “can’t do this anymore.” She abandons Char on the road and drives off.

Later that afternoon, Angela’s car is discovered abandoned in a field, and You Are Not My Mother temporarily leans into more procedural elements, namely where Angela is and what might have happened to her. The mystery remains unsolved, despite Angela’s return home. Those closest to her, including Char’s grandmother, Rita (Ingrid Graigie), suspect something is wrong, though are quick to reduce it to one of Angela’s “low moods.” She was simply unwell, though her new assemblage of prescription drugs, including lithium, is sure to bring her back.

You Are Not My Mother, being a horror feature, isn’t solved that easily. Soon, Char begins to suspect that the person back in her home isn’t really her mother, owing to the stuff of grimoires. There are murmurs in both dialogue and context–You Are Not My Mother is set in North Dublin days before the Samhain festival–of changelings, Irish fairies that snatch human beings and replace them with one of their own. To Dolan’s credit, the uncertainty is kept high. Smart deployment of both grounded and supernatural scares keeps the ambiguity worthwhile for most of the running time, avoiding the trap of other, adjacent metaphoric horrors too easily solved. At times, it’s easy to believe that it simply is Angela’s illness that’s shifted her personality.

When the third act arrives and answers are provided, You Are Not My Mother becomes too literal and falls too frustratingly short of what it could have been. The machinations of the plot laid bare, it’s curious why Dolan didn’t lean more heavily in one particular direction. While the preceding scares worked in the moment, they’re inconsistent and unfortunately tame when recontextualized by new revelations. It’s an unfortunate misstep, one that perhaps owes to the indie scenes hesitance to sometimes embrace its genre roots. In striving for elevation, it too often falls short.

You Are Not My Mother is nonetheless worthy of a watch. The acting, particularly from Doupe and Bracken, is exceptionally good, both actors managing to convey a breadth of emotion with the vagaries of their faces. Additionally, the Samhain setting lends itself to some gangbuster scares, including a third act foray into bonfires and protective rituals. You Are Not My Mother scares in the moment, though its haunts are unlikely to linger.

You Are Not My Mother screened Monday at the Toronto International Film Festival. TIFF runs September 9–18, 2021. For more information and showtimes, visit the festival’s website.

You Are Not My Mother endeavors for elevated scares, though its insistence on metaphor over horror is often to its detriment.