Evie is a haunting and effective drama about one woman struggling to fight off her inner demons so that she can finally move on with her life. 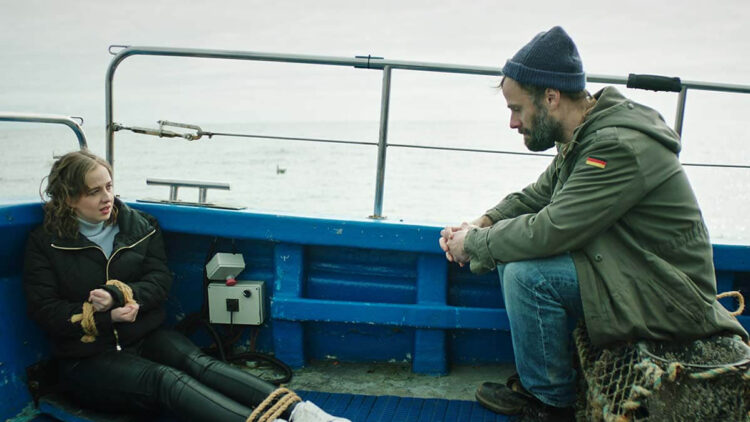 2021 marks Dominic Brunt’s return to FrightFest after the premiere of his outrageous and gross-out horror comedy Attack of the Adult Babies. This time he’s presenting Evie, a new folklore-based horror drama which he co-wrote and co-directed alongside Jamie Lundy.

Evie opts for a far more nuanced approach than Attack of the Adult Babies, as it works as a social realist drama with only some vaguely implied supernatural elements. Holli Dempsey stars as the titular Evie, a troubled woman coping with the traumas of her past. When she was young, she and her brother Tony were placed in separate foster homes to be kept away from their violent father. The majority of the film focuses on an adult Evie reconnecting with the introverted Tony (Jay Taylor) after spending years apart, and the hardships they face along the way. Tony proves to be an introvert who would rather spend his time sailing across the high seas and writing self-published novels than interacting with other human beings. Evie is a human train wreck who drinks to forget about her traumatic past.

Related: FrightFest 2017: The UK Prepares for The Attack of the Adult Babies

Dempsey sells these scenes, creating a flawless portrait of a troubled and deeply miserable woman unable to heal. Taylor is also effective as the secretive Tony, who may also be hiding his own inner demons. While hardly a model family, Tony and Evie start to slowly rekindle their bond with the help of a well-meaning priest (Michael Smiley). However, a sinister force from their past soon threatens to break them up again. Thomas Ragsdale’s haunting score also constantly reminds viewers that something is not right with these characters. We never quite feel at ease.

During the prologue sequence, we see a young Evie on the beach with her family. She initially appears to be a somewhat normal child who likes to bother her mother with random animal facts (apparently a giraffe is the only animal that purrs like a cat). But that suddenly shifter when she expresses violent tendencies after finding a mysterious pendant washed up on the shore. We soon learn that the malevolent spirit attached to the pendant, never fully abandoned Evie.

The Selkies of Norse and Celtic mythology serve as the inspiration for Evie. These creatures can transform into both humans and seals. This leads to a few short sequences of minor fantastical imagery throughout the film. But it’s unclear about what is real and what is not. Regardless, this is very much a story about two deeply troubled siblings trying to make peace with each other.

Regardless of how you view Evie, the nuanced direction and the strong performances from the cast help to make this into a highly effective slow-burning drama. It’ll likely be remembered as one of the most thought-provoking films from FrightFest this year.

While it will ultimately be up to you to decide if the supernatural elements were real or just in the protagonist’s head, there is still no denying that Evie is a haunting and effective drama about one woman struggling to fight off her inner demons so that she can finally move on with her life.