Horrible Imaginings Review: ‘Take Back The Night’ Is an Infuriating Yet Cathartic Creature Feature

Gia Elliot's feature is a poignant commentary on the struggles faced by sexual assault survivors. 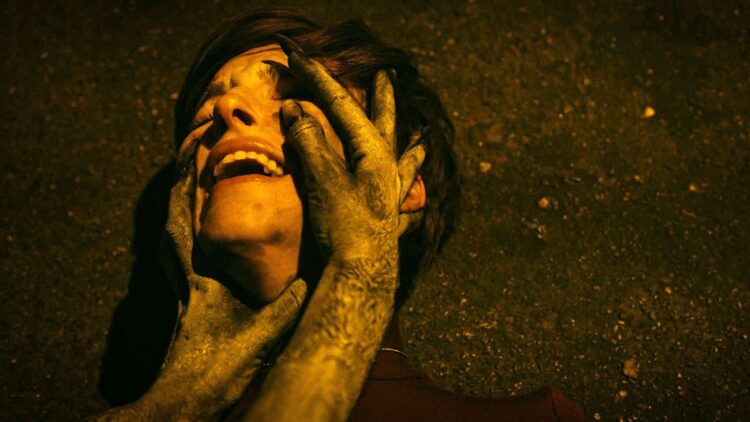 If a woman is attacked and she reports it, will anyone believe her?

It’s a scenario that’s all too familiar. It’s one that’s become expected, but still never ceases to invoke rage. Despite decades of activism, outreach, and education, it’s still incredibly hard to get any kind of justice after surviving a sexual assault. Even if the survivor files a police report and endures a physical examination to collect evidence, the onus is on them to convince law enforcement that the assault happened the way they say it happened…or even happened at all.

Take Back The Night puts a spotlight on the demoralizing and optimism-killing process of seeking justice and coping with trauma after being assaulted—with an even more horrifying twist.

Written, directed, and produced by Gia Elliot, Take Back The Night follows a young woman named Jane who embarks on such a quest. Jane, an up-and-coming artist with a massive Instagram following, is brutally assaulted after leaving her first (and wildly successful) art show. She does what we’re often told we should do after a rape: she goes to the hospital, undergoes a sexual assault forensic exam, and is interviewed by a detective to start an investigation. During the interview, Jane describes her assailant’s smell, tries to describe the appearance, and keeps referring to the attacker as “it” (rather than “he”).

Related: Horrible Imaginings Review: ‘Charon’ Is a Brutal Exploration of Isolation and Betrayal

No human assaulted Jane. She was assaulted by an actual monster.

Although Jane sustains severe injuries from the attack—a deep horizontal cut on her lower abdomen and a scar on her wrist shaped like a crescent moon—and shows up at the hospital covered in black grime and soot, no one believes her account of that night. Her sister, and a number of her Instagram followers, believe that she was attacked, but the nature of her attacker seems to be too far-fetched. She’s accused of lying for attention.

The detective assigned to her case—a woman—comes to doubt that Jane was really assaulted at all. Private details of her life are brought to light: a traumatic childhood, a family history of mental illness, a stint in a psychiatric hospital, and a criminal record. The detective also scrutinizes Jane’s actions and behavior leading up to the “alleged” attack. Actions like partying, taking recreational drugs (and not disclosing that during her initial interview), and having sex with a married stranger at her art show.

But Jane knows what happened to her. And she’s determined to protect herself and prevent similar attacks from happening to other people.

Related: How Jennifer Zhang Made ‘Charon,’ the First Horror Feature Edited on a Smartphone App

Take Back The Night has been called a “riot grrrl creature feature” and it more than earns that title. Our protagonist is a smart, creative, and capable woman whose determination and take-no-shit attitude makes her the kind of Final Girl-esque character we actively root for. Emma Fitzpatrick (who also co-wrote and co-produced the film) plays Jane with both strength and unflinching vulnerability. Fitzpatrick’s portrayal is nuanced and entirely believable, even as the supernatural events unfold. Her performance is supported by the actors playing Jane’s sister (Angela Gulner) and the detective (Jennifer Lafleur).

None of the characters, besides Jane, have names. In that vein, Jane doesn’t have a surname. Her Instagram handle is even “JaneDoeDoes”—a play on the term “Jane Doe.” It’s one of the many interesting choices in the writing of Take Back The Night. Another such choice is the fact that the film is nearly completely devoid of men. There are technically two male characters, but we never see their faces and they only serve as a footnote in the narrative. This lack of men—which was undoubtedly deliberate—in a film about female rape and trauma was utterly refreshing. It actively defies the tired and offensive “Women in Refrigerators” trope, where women are violated, brutalized, and murdered, only to have the central focus be on how it affects the men in their lives.

It’s also worth noting that the people who doubt the validity of Jane’s attack are women. And although this should be shocking, it’s not. There are, unfortunately, a lot of women who pick apart and try to poke holes in other women’s reports and accounts of violence.

Additionally, the film borrows elements from real-life cases, highlighting both the complexity of trauma and the obscene failures of the justice system. To drive it home, the film shares a name with one of the most prominent organizations dedicated to combating and ending sexual violence.

Take Back The Night is a creature feature, yes. But humans are the main perpetrators of horror. There are terrifying chase, attack, and fight sequences featuring the monster. But the scariest part of the film is how realistic the story is; it sadly portrays the reality of being doubted and blamed despite “doing everything right.” In short, survivors of sexual violence are often questioned and treated more harshly than the people who commit these crimes.

Although the film is rage-inducing, it ends on a cautiously positive note. There’s closure and reconciliation. Through her use of social media, Jane sparks a MeToo-like movement, fostering a network of solidarity, community, and support. Jane must still work through her trauma…but she doesn’t have to do it alone. It’s a conclusion that’s consistent with the story and one that’s deeply satisfying.