FrightFest 2021: ‘The Show’ Is A Confusing Yet Engaging Supernatural Detective Mystery 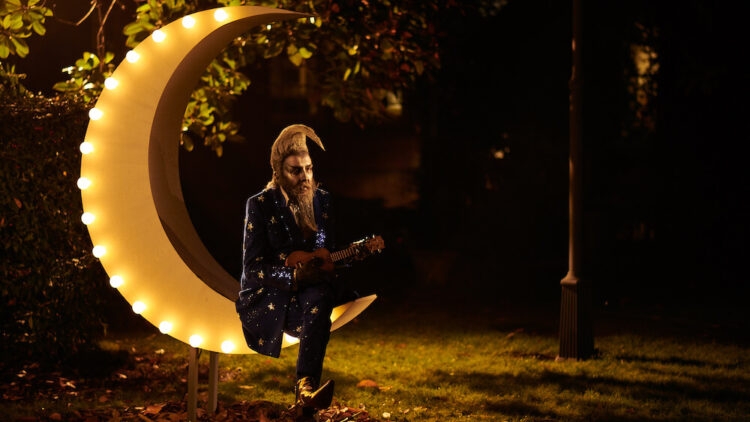 Comic writer Alan Moore is known for his hatred of Hollywood. So it was hardly surprising to learn that he decided to use Northampton as the setting for his low-budget supernatural mystery film The Show, as his native working-class town is about as far removed from the glitz and glamour of Hollywood as you could possibly imagine. Moore’s screenplay offers a somewhat realistic yet also fanciful representation of Northampton which could be representative of how he viewed the town when he was growing up.

On the other hand, during Q&A, director Mitch Jenkins described how he and Moore enjoy getting stoned and coming up with ideas for films together. Whether or not The Show seems like a film which was written by a stoned man is probably up to you to decide.

Tom Burke stars as Fletcher, a private investigator who arrives in Northampton to investigate the theft of a priceless crucifix artifact. Fletcher is still relatively new to the profession, so he hires two children investigators. The two kids, Tim and Other Tim, are hilarious. They speak like detectives from classic noir films while also remaining completely straight-faced and never delving into campiness or absurdity. Similarly, the film also turned black and white whenever Tim and Other Tim were onscreen. It adds to the overall film noir tone of the characters. Sadly, we only get two scenes with these diminutive sleuths.

Instead, most of The Show consists of Fletcher wandering around Northampton, taking in everything the town has to offer. His new roommate tour guide Becky (Ellie Bamber) also makes sure to share the town’s history. There are plenty of other fun supporting characters as well, including an oblivious nightclub employee with an eidetic memory, a philosophical taxi driver who says “God build the country, but he didn’t build the town”, and a voodoo practitioner who may hold the key to unlocking the mystery. Again, most of these characters did not have enough screen time in order to become fully fleshed out. Instead, we just have to focus on Fletcher, who isn’t a particularly interesting or intriguing character.

However, one of the few prominent supporting characters in The Show is journalist Faith Harrington (Siobhan Hewlett). Fletcher visits her in the hospital after she is nearly killed by a kinky sex game with her boyfriend. Faith eventually uses her investigative skills to help solve the mystery of the missing cross. At this point, the script has already become so convoluted that most viewers may need to start taking notes to keep track of everything.

On the other hand, given Moore’s well-known hatred of superheroes, it was surprising to see a librarian character wearing a superhero mask showing up in several scenes. It’s unclear exactly what purpose this character was intended to serve, as he had no overall relevance to the story. You can probably find some kind of deeper meaning or symbolism if you care to look hard enough.

Before long, Fletcher uncovers a supernatural plot being orchestrated by Frank Metterton. He is a long-dead magician who somehow discovered the ability to appear to the living from an otherworldly theatre where he resides. Metterton is played by Moore, who actually proves to be a better actor than you would probably expect. His beard is full of glitter; he has a ridiculous glittery beard; he wears a flamboyant purple suit and clown shoes. Moore certainly wanted to ensure that Mettertron is a character who audiences will never forget.

While it was a little annoying to hear the character espousing some of Moore’s questionable world views (he says that modern films only feature explosions and no plot) it was still hilarious to hear his horrified reaction to the word ‘agenda’. He says that it sounds like something which would be written on the board during a corporate boardroom meeting for a corporate mattress company and lamenting why people can’t use simple yet effective words like ‘plot’ instead. The Show is a film where hit-men prefer to be referred to as ‘exit-technicians’, so wording really is everything here.

Eventually, Fletcher’s foul-mouthed client, Patsy Bleaker (Christopher Fairbank) shows up to retrieve the cross for himself. This leads to a brutal climax where the elderly gangster faces off against his former client at a destroyed nightclub. If you were able to follow the plot, you’ll probably find this to be a satisfying conclusion. However, most of us will be scratching our heads and wondering what’s supposed to be going on.

While the plot was overly convoluted and the film probably requires multiple viewings to fully understand, The Show still featured an entertaining cast of eccentric side characters, making it an exaggerated and unforgettable examination of life in Northampton.