'Superhost' is satisfactory in ways all thrillers should be, but never quite commits to its premise or its disparate genre influences. 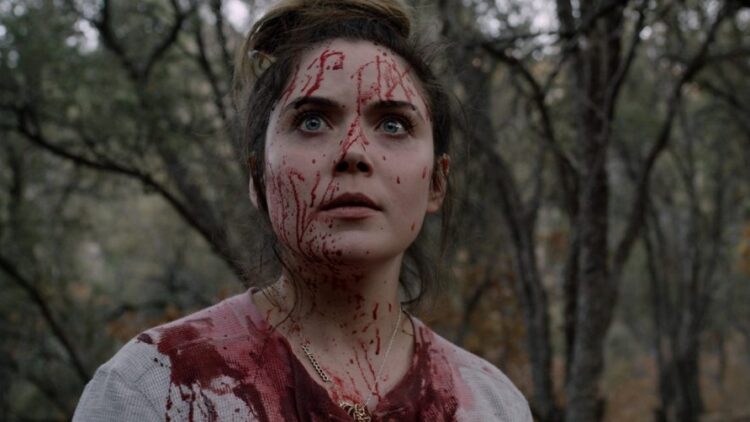 
Superhost is the cinematic equivalent of a Stouffers microwave dinner. It’s quick, it’s easy to digest, and when the going gets rough, it works well enough. There’s nothing spectacular about that kind of dinner, and in a sense, it serves a utilitarian purpose–it is there to satisfy a need, nothing more.

Written and directed by Brandon Christensen (whose last two features were considerably more sumptuous meals than what he serves here), Superhost is simply fine. For audiences looking for a quick thrill, some good gore, and a possibly entertaining horror lark, the movie works. For anything more, however—anything with depth, style, or even something worth saying—Superhost isn’t worth a reservation.

Sara Canning and Osric Chau star and Claire and Teddy respectively, a couple of vloggers whose angle is staying at rental properties and reviewing them for their followers. Their bit is, in a sense, emblematic of Superhost’s worst qualities writ large. As a couple, their relationship is nondescript and shapeless while their streaming channel is rendered with even less clarity. From banter to graphic elements, there’s nothing to distinguish the couple from other real life vloggers and it’s unclear why, exactly, they’ve commanded the online presence they have. In effect, they’re irritating and lack the star quality that Superhost desperately wants its audience to believe they have.

It’s compounded when they arrive at their next property, a woodland retreated owned by, you guessed it, superhost Rebecca (Gracie Gillam). The video they plan to film there is ostensibly poised to be their best yet, though it is never made clear why. It’s an obstacle any film about creative types will encounter: Audiences will be as inclined to evaluate the fictional art as much as the film itself. And Superhost never overcomes these problems innate in its central conceit.

Worse still, and less forgivable, is how that same sense of uncertainty and tepid approach to character is present in the narrative and scares.

Most of the scares, it should be noted, are effective. Christensen makes use of negative space and stellar sound design, much as he did with both Z and Still/Born, to elicit jolts with even the most innocuous of frights. It’s a shame, then, that those frights are so lifeless.

Early on, Superhost dips into both slasher and supernatural territory, including the frightening visage of a man with glowing eyes in the woods, without ever committing to either. It’s even worse when the aforementioned video—the one Claire and Teddy have to make—is recurrently deployed as a reason for the couple staying. Despite several occurrences that would send even the most steadfast traveller packing, Superhost devolves into a frustrating routine of Claire and Teddy encountering something terrifying, going to bed, and waking the next morning as if it never happened.

Superhost does later redeem itself in its third act. As the film’s central menace becomes clear—even though it isn’t a particularly inspired or surprising choice—Superhost manages to deliver some stellar practical gore, genuine thrills, and even a Barbara Crampton cameo for good measure. One wishes Superhost had the foresight to deliver more in line with the finale, but it’s enough to elevate the film from bad to watchable.

That, fundamentally, is what best describes Superhost. Brandon Christensen is a talented filmmaker, and though this is his weakest offering yet, it’s never exactly boring and successfully manages a last ditch effort to thrill. It’s not a rental anyone will remember after their stay, but for those with reasonable expectations, it works well enough.

Superhost is now available on Shudder. All images courtesy of Shudder.

Superhost manages to eke out some minor thrills and great kills from its uninspired premise.