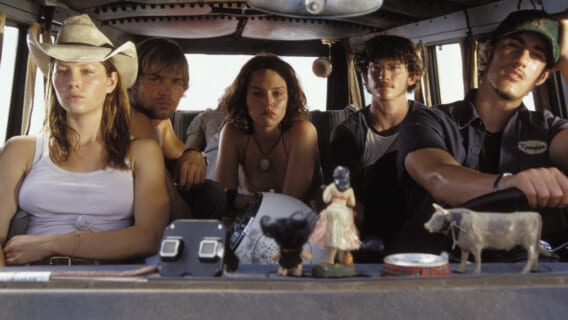 This year is slated to be big for horror. Blumhouse’s M3GAN has taken the world by storm with dead-eyed dancing dolls hitting the streets to celebrate its promotion, Alyssa Sutherland is absolutely harrowing in the trailer for Evil Dead Rise—I say “MOMMY’S WITH THE MAGGOTS NOW” to my dogs at least twice a day now—and we’re even on a track for an Exorcist reboot by the end of the year. But what if I told you two decades ago horror had a year that was just as good and a whole crop of killer horror movies released then made way for the renaissance the genre is having today?

2003 was one of the best years for horror, and here’s a month-by-month re-watch list of releases turning twenty in 2023 to prove it.

2003 kicked off Darkness Falls, a strange little movie about a murderous crone, with a backstory loosely based on the lure of the tooth fairy, who haunts the small town of Darkness Falls. And while the film garnered little in terms of critical favor, it somehow remains a favorite in the hearts of horror fans. For 90s millennials, it was a first horror watch for many that calls to mind memories of sleepovers and nights spent with the fun babysitter. What better way to kick off the year than with a little nostalgia?

Technically released at the tail end of January, Final Destination 2 dominated box office charts in February 2003. It’s an incredibly solid sequel that’s so early 2000s in the best way possible, and recently, its iconic highway pile-up premonition scene ranked at an impressive number fifteen on Shudder’s 101 Scariest Horror Movie Moments of All Time. The franchise went on to churn out three more sequels, and its influence can be felt in films like 2017’s Happy Death Day and its 2019 sequel Happy Death Day 2 U. Rumor has it, as of July 2022, HBO has resurrected plans to release the sixth installment of the franchise with Spider-man: No Way Home’s director, Jon Watts, at the helm.

On March 14, 2003, a suspense-heightened and grittier update to the 1971 film Willard hit screens. The story follows social outcast Willard, portrayed by Crispin Glover, as he trains an infestation of rats to carry out his bidding against the coworkers who make his life hell at his deceased father’s company. Willard’s director, Glen Morgan, went on to direct Final Destination 3 and to executive produce Jordan Peele’s 2019 reboot of The Twilight Zone.

On April 11, 2003, Rob Zombie released his raucously ridiculous and cult-classic House of 1000 Corpses. What Zombie calls his attempt to blend The Texas Chainsaw Massacre and The Rocky Horror Picture Show, Corpses earned Zombie a spot in horror’s infamous “Splat Pack,” a group of early-2000s directors known for re-popularizing the use of extreme gore in their films as an effort to get horror back to its more R-rated beginnings, which included James Wan, Neil Marshall, Leigh Whannell, Eli Roth, Alexandre Aja, and Greg McLean.

If 2003 was good for any lesson, it’s this: stay in the fucking car, especially if you’re a young twenty-something. And perhaps this rings most true of all with Rob Schmidt’s Wrong Turn, which debuted on May 30, 2003. In the film, a group of college kids get in an accident after some car trouble and find themselves stalked by a legion of inbred cannibals. This movie, like so many from 2003, leaned head-on into exploring the adventurousness and arrogance of youth and perhaps even a little too far into the trope of bad things befalling those who indulge in more promiscuous behavior.

Still, Wrong Turn remains a favorite in the hearts of many horror fans, enough so that it got a remake in 2021 with Matthew Modine of Stranger Things. Though unfortunately, the remake didn’t nearly get the attention it deserved, it’s absolutely worth a watch after you knock the original off your re-watch list.

Alexandre Aja, a member of the aforementioned “Splat Pack,” released High Tension to French theatres in 2003, and the film has had an impact on a global scale with its shocking twist-ending ever since. Following the story of Alex and Marie, the travel to Alex’s secluded country home only for her family to fall victim to a vicious attack, High Tension has made way for other extreme French horror films such as Alexandre Bustillo & Julien Maury’s Inside, Pascal Laugier’s Martyrs, Gaspar Noe’s Climax, and Coraline Fargeat’s Revenge to have mass-market US success. Aja himself went on to direct the iconic 2006 remake of The Hills Have Eyes and is still shaping his legacy in horror—he has a horror/thriller in development with Halle Berry called Motherland about a family plagued by an evil spirit for decades.

Danny Boyle’s 28 Days Later hit the US on June 27, 2003, and, along with Zack Snyder’s 2004 Dawn of the Dead Romero remake, played a major role in ushering in the modern era of Zombie. That includes record-breaking franchises such as The Walking Dead and incredible films like World War Z, Zombieland, and Train to Busan. Though zombies seemed to have lost momentum, in the last few years, Alex Garland (Annihilation), who got his start in film writing 28 Days Later, is currently working on a third installment to the story called 28 Months Later.

On August 15, 2003, the final installment of both the Nightmare on Elm Street and Friday the 13th original franchises were delivered in the form of Freddy Vs. Jason, a mixed-up, mashed-up slasher meant for horror’s most loyal fans. Perhaps a bit ahead of its time and even reaching out of its genre (considering all the crossover events pumped out by Marvel Studios these days), Freddy Vs. Jason is still a fun watch and worth revisiting to pay homage to the iconic Robert Englund. The film also marks Englund’s final cinematic appearance as Krueger.

Credited as the inaugural film of the “Splat Pack” era, Cabin Fever was released in the US on September 12, 2003 and has been making everyone think twice about co-ed camping trips ever since. Heavily inspired by the original Sam Raimi’s Evil Dead, Cabin Fever was Eli Roth’s debut feature, and it propelled him to a place of creative authority that’s had a massive impact on the horror industry ever since. Cabin Fever has been a source of inspiration for the 2011 genre commentary The Cabin in the Woods, and its influence can be felt in Fede Alvarez’s 2013 Evil Dead remake.

October 17, 2003, brought us what is arguably the greatest horror remake of all time: The Texas Chainsaw Massacre by Marcus Nispel. TCM recentered and reinvigorated the nostalgic narratives of road trips gone wrong AND cannibalism as staples for the genre. In years since, we’ve seen the remake’s influence on road trip gone wrong flicks like Green Room, X, and arguably even Midsommar, and in the recent explosion in the cannibalism space with movies like Bones and All. It’s interesting to question what about 2003 made horror directors want to poke and prod at the hubris of young people, but something certainly must have been there.

November 21, 2003 brought us the criminally underrated Gothika directed by Mathieu Kassovitz with Halle Berry at its helm as the iconic Miranda Grey. The story follows Grey, a psychiatrist who wakes up as a patient in her own hospital after a strange car accident, through her internment, during which she reveals a sadistic sex abuse scandal. Gothika’s influence can be felt in films like 2009’s The Uninvited and in 2010’s The Ward—two more unsung horror films that further prove the point that themes surrounding believing women don’t always get the attention they deserve.

And for the last month of the year, it feels fair to break the rules, especially when you consider that The Exorcist turns FIFTY in December 2023. Arguably, the genre-defining film in horror, The Exorcist’s influence can be felt in almost everything, from The Conjuring to Hereditary to The Exorcism of Emily Rose. Give it a rewatch to celebrate all the places it has already taken us, and all the places it will continue to inspire us to go.

So, here’s hoping 2023 delivers us an equally abundant year of movies that hold up just as well in the decades to come as these iconic films have, and in the meantime, happy watching.