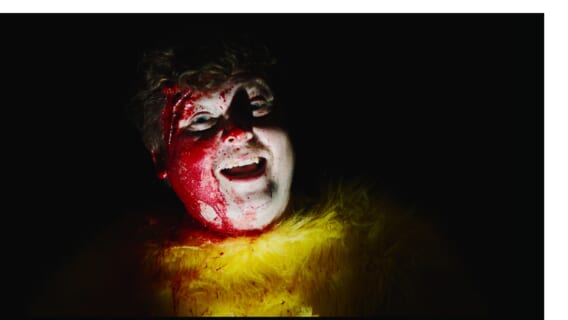 Murder, Anyone? is not your typical comedy. Director-producer James Cullen Bresack had his hands full with this one. Not only is it a zany meta style of comedy we don’t see much of today. It was also the first film he adapted from his late father’s, Gordon Bressack, list of scripts written for theatre. He promised his dad that he would adapt his work for the screen. It’s a promise James is keeping and decided to start with the last script his dad finished.

Most of us grew up with the elder Bressack’s work as he touched most of the cartoons we loved going back to the mid-80s. Most notably, his tenures with Pinky and The Brain, Animaniacs, and Tiny Toon Adventures. His style of comedy was big and bawdy and it’s hard to not see the thumbprints when watching Murder, Anyone?

In the film, two playwrights, George and Charlie, are tasked with the challenge of creating the next “avant-garde, surrealistic, mind-bending neo-noir thriller”. As they write, the story comes to life in real-time.

We caught up with James to talk to him about this film, and the process of working on something so personal.

DC: Your movie Murder, Anyone? is adapted from your dad’s play. You mentioned at FilmQuest that you promised him that you would adapt some of his work for the screen. What made you choose to adapt this one first?

JCB: I felt like it was a fitting film to start with, especially because it was the last creative endeavor my father completed before he passed away. So it felt natural to progress right into this story. Additionally, the film is about two writers arguing about whether the project that they are writing should be a movie or play, and that is an argument that my father and I had many times. So seeing as the idea for the project was spurred by conversations that he and I had, it felt only natural to start there.

DC: Which of his other plays are you thinking of adapting next?

JCB: He has this play called Fuggedaboutit, which is about a male model with amnesia, and that feels like the next comedic endeavor I will tackle of his plays. These projects are very fun for me as they seem to be things that I’m able to do between my action movies. They are just pure fun and entertainment, and it’s almost like a vacation for me.

DC: I’m one of the people that finds it hard to work on projects that are too personal. Most of us avoid dealing with our feelings and can usually bury ourselves in our work. However, Murder, Anyone? is a very personal project for you, so you were not granted that luxury. How did you know when it was time to start this process?

JCB: Before my dad passed away, he asked me not to let his scripts die on a hard drive with him. So when that day came he asked me to look at his hard drive for all of his scripts, and it took me about two and a half years to actually do it. No one can really tell you when you’re ready, but when it’s time you just know. My father always told me that every movie I make before I turn 30 would be known as my early work, so I should make as many movies as possible as a director. So I felt it fitting that the last movie I made before turning 30 was his script. We wrapped around my 30th birthday, and I wanted his words to carry me into the next chapter of my life.

DC: What were some things you did, or set in place, to practice self-care while wearing carrying so much responsibility in this film?

JCB: I just kept a light attitude and surrounded myself with a cast and crew made up of friends. I think the anxiety and build-up to making it was the hard part, but when we were on set, that part was all fun. We were constantly cracking jokes and keeping it light.

DC: Most of us know your dad’s work because we grew up watching Animaniacs and Pinky and the Brain. He had a very specific sense of humor, and I wonder why I didn’t clock him as a playwright sooner. Was Murder, Anyone? hard to transfer to the screen? If so, what were some of the most unexpected challenges?

JCB: Thank you for the kind words about my dad and his writing. One of the most difficult challenges of making the film was that I had seen the play that my dad had both written and directed. So, putting my own spin on it while preserving what he originally had intended was a difficult balance. It almost felt as if there were two directors tackling the project.

DC: Most of us know some of your cast from watching those cartoons. Was it easy getting them on board for this movie? Did you get to meet them before this project? Because I can’t imagine being a kid and talking to the guy that plays Brain.

JCB: Maurice LaMarche and my dad were best friends, so I’ve known Moe pretty much my entire life. He’s like family, and he was very much on board for making this very special project for my father. Charlie Howell was also my father’s writing partner his entire career, and I’ve known him my entire life. He’s also like family, so naturally, he was very keen on being involved as well.

DC: Because Murder, Anyone? is a comedic play-within-a-play-within-a-movie, did that change your pre-production process?

JCB: No, my process is pretty similar on all movies. I still break down the script, and shot list and prepare to make the film. The only difference really is the style that I choose to proceed with and the thought process. Pre-production stays consistent. The only thing that changes is the creative and the ideas.

DC: Murder, Anyone? feels like a style of movie we don’t see anymore. It’s also very different from the other things on your resume. Was this subgenre something you always wanted to try? Was it weird stepping out of your comfort zone?

JCB: Honestly, I feel like this is more in my comfort zone because it’s what I grew up around. For me, making a movie like this was something I thought about my entire life. My entire career people said that everything I got made was because of who my dad was. That never helped my career other than a bragging right. People wanted to write off my accomplishments because of that “nepotism,” but my dad never gave me a job, nor did he open a single door for me. I leaned away from the comedy genre to not give that argument more ammunition, but now that he’s passed away I felt it was my duty to carry the comedic torch in his honor.

DC: What is one thing about this film that no one has asked you and you want to tell us?

DC: You put out a ton of movies a year and are juggling a few projects as we speak. Can you tell us what is next?

Let me know if you’re excited to check out Murder, Anyone? at @misssharai.