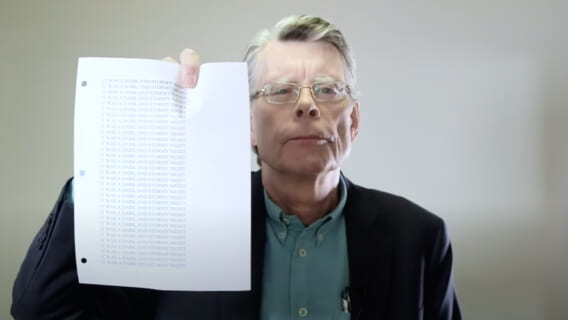 2022 blessed horror fans with countless quality original horror titles on screens both big and small. There was such a spoil of riches, in fact, that it became easy to miss out on some otherwise unmissable genre output. Don’t let that happen to From, a standout horror series from Epix.

From the executive producers of Lost, see what Stephen King says about the show below.

According to Epix, From “unravels the mystery of a nightmarish town that traps all those who enter. As the unwilling residents search for a way out, they must also survive the threats of the forest, including the terrifying creatures that come out at night.”

Hailing from series creator John Griffin, From stars a killer ensemble of faces both fresh and familiar. Harold Perrineau, Catalina Sandino Moreno, Eion Bailey, David Alpay, Rick He, Scott McCord and Elizabeth Moy all appear in From, which premiered on Epix last winter.

The series was popular among both fans, earning itself a greenlit second season which should appear sometime this year.

Check out what Stephen King thinks about the Epix series:

From has also proven to be popular among television critics, earning itself a stellar 96% average rating from 23 different reviews. Check out what people are saying here.

Lastly, have you seen From Season 1 yet? Let us know what you think on Twitter via @DreadCentral. We’re always around to chat about all things horror on TV.