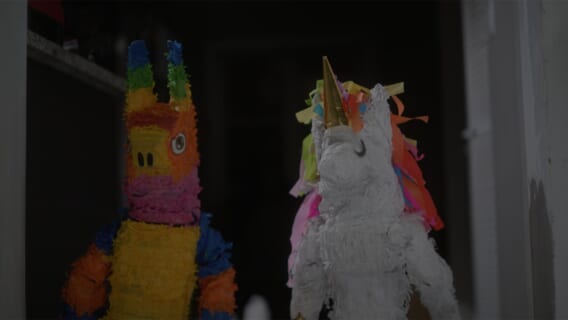 Bride of the Killer Piñata is the sequel to Killer Piñata most of us never knew would happen. This sequel has been a long time coming. So it’s exciting to see it making the festival rounds and holding small screenings.

Not a lot is known about the film at the moment, but we did some sleuthing to see what we could dig up outside of IMDB.

The movie is produced by Angry Mule Films, a small indie company in Chicago. Angry Mule Films describes themselves as, “A group of friends in Chicago, making films with heart, humor, and horror – not always in that order.” They have a Youtube channel where you can check out some of their previous short films.

Watch the Bride of the Killer Piñata trailer:

While Bride of the Killer Piñata is still making the festival rounds, you can keep tabs on the movie on their Facebook page. You can also buy merch there if you want a piece of this project in your home. You can also watch the first film, Killer Piñata, on Tubi to tide you over. We’re excited to meet the bride whenever she makes her formal debut.

Let me know if you are into this Bride of the Killer Piñata at @misssharai.