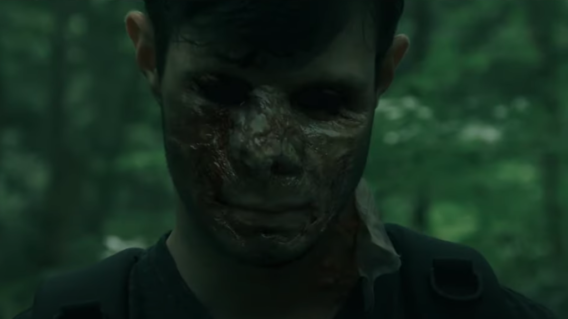 Trails… they’re useful, right? When you’re walking in the woods with no one around and your phone is dead, a trail might be a more than welcome sight to see. It means that someone has been there — someone passed through the same neck of nowhere that you’re currently stranded in. Not only have they been there, but they’ve come past enough times to warrant making a path to ensure that they could do so indefinitely. At least, in theory. Sometimes, those trails can lead you to darker places, making you wish you’d just taken your chances of being lost.

On that ominous note, I feel it’s the perfect time to transition to the topic of today’s discussion: Nick Psinakis and Kevin Ignatius’s latest feature — The Long Dark Trail!

“After two impoverished teenage brothers escape their abusive father following a bloody battle, they embark on a treacherous and haunting journey to find their estranged mother who has become the disciple of a sadistic cult lurking deep in the forests of rural Pennsylvania.”

On the flick, the duo said:

“The Long Dark Trail is an independent horror film shot in the forests of northwestern Pennsylvania. It is inspired by indie teen graphic novels (such as Preacher and Hellblazer) and gritty horror films from the 70s (Deliverance and The Hills Have Eyes).”

Are Preacher and Hellblazer considered “teen graphic novels”? I’m genuinely curious about that. I mean, I read them as a teen, and I turned out great! Still… I digress.

“This journey into suspense takes two listless brothers, abandoned and alone, through a series of disturbing experiences in the heart of a stygian forest that teeter on the line between supernatural and temporal, testing their senses and fundamental understanding of reality. A primal story at its core, we explore the concepts of fate versus free will and the search for our origins and their meaning. Do you accept the hand you are dealt without question or do you fight back? Are we simply the sum of our parents’ traits, destined to replicate their path in life, or can we chart our own course?”

Asking the heavy questions. No fate but what we make and what not. Deep, dark woods have been a hard-hitting metaphor for exactly these questions since forever, from the many fairy tale forests to the passage straight to the nine circles of Hell in Dante’s Inferno.

“The direction and pacing of the film have a slow and hypnotic quality at the beginning which builds to a crescendo and embraces a Heart of Darkness theme. The viewer is essentially led down the path to horror.”

The more I hear about this flick, the more I think this trail might be worth taking. Maybe less so for the brothers… not that they have much of a choice.

The film stars Nick Psinakis himself, along with Trina Campbell, Brody O’Donnell, Carter O’Donnell, and Michael Thyer. Kevin Ignatius is also doubling up as the movie’s composer, creating an original soundtrack which “creates a hypnotic atmosphere to the film and builds suspense.” Its rhythmic style pays homage to John Carpenter and It Follows, with possible plans to put it on vinyl and streaming services.

The duo also hired graphic designer/illustrator R.L. Black to “create a series of materials to help promote the film that again conjures the spirit of 70s and 80s horror films that The Long Dark Trail pays tribute to.” This includes a potential graphic novel/comic series based on the movie, which they already have sample pages of.

There’s no word on a release date yet, but as soon as there is, I’ll let you know!