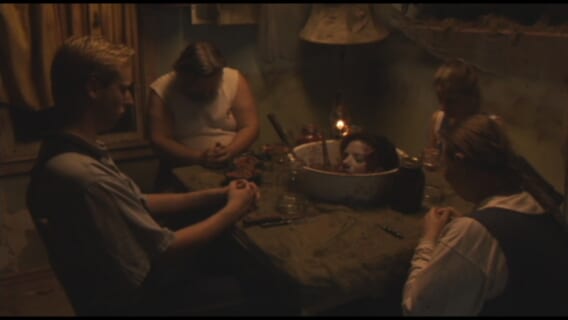 Reddit has rediscovered a Thanksgiving Slasher in time for your holiday celebrations. That’s right! The internet just saved our holiday horror plans with a few days to spare. A Redditor posted that they ran across this obscure movie, and we’re lucky they were compelled to share their work. They have found none other than the gem that is ThanXgiving.

ThanXgiving is the 2006 obscure holiday horror most of us have either forgotten about or never knew existed. The film is hard to find, so we’re grateful that ATTACK_THE_CORE also dropped a link. Now we can all watch it when we’re feeling festive later this week. Not all heroes wear capes, ATTACK_THE_CORE, but we see you!

In the film, a group of film students travels deep into the woods to make a movie, thinking that they’ve found the perfect location in the form of an abandoned campground. Little do they know what horrors await them.

Lehman was the original Jason Voorhees, so it feels weird that this movie is so hard to find. However, it also makes it feel like an even more appropriate holiday watch with the fam. After all, we all remember the original Friday the 13th and the familial themes that led Mrs. Voorhees to turn camp counselors into skewers.

As we found out last year, the pickings are slim when it comes to Thanksgiving horror movies. However, the few movies we found are all kinds of chaos. We suspect that we’ll say the same about ThanXgiving.

Let me know if you plan on adding ThanXgiving to your holiday viewing at @misssharai.