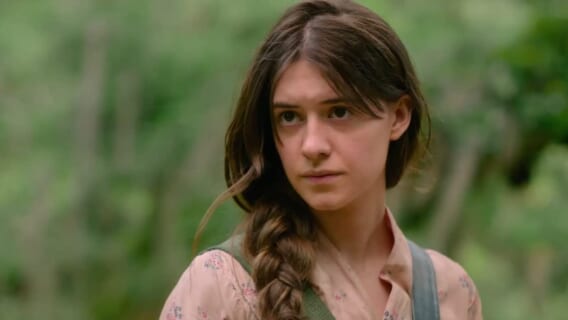 Where the Crawdads Sing is a coming-of-age murder mystery film. The movie has been living in Netflix’s Top 10 for a couple of weeks now. It is adapted from a book and stars Daisy Edgar-Jones (Fresh and War Of The Worlds).

In the film, a woman who raised herself in the marshes of the Deep South becomes a suspect in the murder of a man with whom she was once involved.

It seems like standard fare until you Google the book. Turns out, the book this trending film is based on is steeped in a controversy surrounding a real-life murder investigation. Where the Crawdads Sing author, Delia Owens, her son, and her ex-husband are wanted for questioning for a 1995 murder in Zambia. According to Time:

The tragedy took place in 1995 and was captured by an ABC film crew that was following the Owenses for a documentary originally intended to be about the couple’s conservationist efforts. The footage then became the Turning Point special “Deadly Game: The Mark and Delia Owens Story.” In the special, an unidentified man—referred to in the episodes as a “suspected poacher”—is shot at by a person whose face is blurred. More shots are fired off-screen, and his body goes still.

After the special aired in 1996, the Zambian government opened a police investigation. The body was never found. A cameraman claimed that the author’s stepson, Christopher Owens, was the one who fired the gun. Delia Owens has publicly denied this, saying that Christopher was not present at the scene. “People say Chris did this because they got confused, because the cameraman was named Chris, too,” Owens told Goldberg for his 2010 New Yorker piece.

No one has been charged with the murder, but some people have noted the similarities between Owens’s life and her book, Where the Crawdads Sing. Specifically, the connections between herself and the character, Kya. Kya and Owens are both loners who studied zoology and animal behavior. They also both received the same degrees. Those similarities are innocent enough and a lot of writers write what they know. However, Kya is also accused of murder in the novel. However, Kya stands trial and ultimately gets away with it. It feels very Carole Baskin the more you dig into the author’s past.

Have you watched Where The Crawdads Sing on Netflix? Let me know what you think at @misssharai.