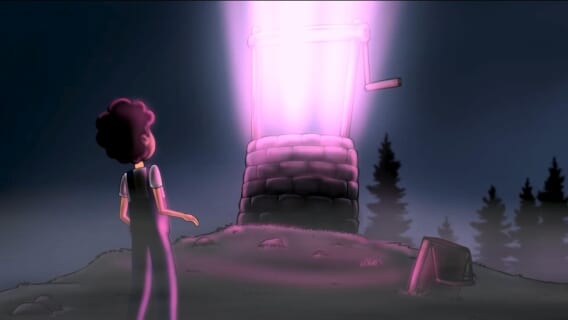 Exegesis Lovecraft is director Qais Pasha’s journey to reconcile his love for H.P. Lovecraft’s work with the racist author. As a Lovecraft fan and a Pakistani-Canadian, Pasha has found himself with a problematic fave. An idol whose work has helped him through some lonely times but who was also a known racist. This conversation is timely as many of us watch our heroes fall almost daily.

This is an especially complicated conversation as POC audiences are forever having to look the other way when consuming media filled with stereotypes and slurs. If you begin to layer on other identities, such as Queer, women, or people with disabilities, it becomes even more difficult. Ironically enough, these worlds are created by people with imaginations that can construct tentacle monsters and visions of outer space. However, they can’t envision a world where anyone not identifying as a cis-straight-white male is treated as human.

One of the strengths of Exegesis Lovecraft is that it doesn’t shy away from Lovecraft’s racist legacy. It also doesn’t ignore his contributions to the genre. Instead, both sides of the complicated coin are given the weight they deserve without losing sight of the other half. The documentary also doesn’t absolve him of his racist leanings. Pasha has done a great job of finding other POCs that are also negotiating this tricky relationship with an author that was, “not politically correct towards Brown people.” They are aware that these were the attitudes of the time. But that doesn’t mean they needed to be represented so loudly. However, while they were drawn to Lovecraft because he too was an outsider, they cannot help but see how his views towards their identities complicate matters.

Exegesis Lovecraft also gives us an extensive look into Lovecraft’s childhood. We find out his father was a sketchy character. The film begins to paint a possible narrative that this is where Lovecraft learned to be awful. I was at first worried that we were going to use his difficult upbringing as an excuse for his racism. But whenever it felt like that’s where the documentary was going, it would swerve back to holding up both ideas. This author represented the worst of humanity. However, he also has a body of work that resonates with many people even today. So much so that it’s still influencing recent TV and film. We get into his unapologetic racism, how he was a Klan sympathizer, and even became a socialist and anti-fascist without ever changing his stances on race.

While Exegesis Lovecraft is very much a film pondering the ethics of separating the art from the artist, it doesn’t give a definitive answer. A lot of the interviewees choose to continue reading his work. One even rationalizes, “he’s racist, but he’s dead,” his work is free so, he’s not getting money from people reading his stuff like J.K. Rowling. This was my loudest laugh of the film and added another layer to the conversation.

People like to yell about cancel culture, although we have yet to see most of the people who have supposedly canceled face consequences. However, what do we do when the problematic fave is dead? What is the protocol for that exactly? Again, the people interviewed have made a choice, but the documentary itself doesn’t feel like it’s telling us to forgive a racist dead guy. It’s just asking us to think about the complexities of the situation. Which is fair as each of us makes these sorts of choices for ourselves regularly.

Have you checked out Exegesis Lovecraft? Then let me know what you think at  @misssharai.

It’s a very academic look into the history of H.P. Lovecraft and the complicated relationship POC fans have with his work. It’s an important conversation and worth the journey.