‘Freeze’ Is A Chilling Tale Of Lovecraftian Terror [FrightFest Halloween 2022] 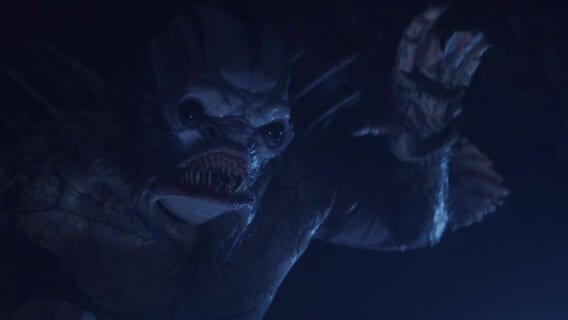 Despite his young age, director Charlie Steeds already has a large number of films under his belt, with The Barge People, Death Ranch, and Werewolf Castle being a few examples. For his latest project, the filmmaker ventured to Norway to create a chilling (in every sense of the word) new Lovecraft-inspired tale called Freeze. And make no mistake, this is a film that will chill viewers down to their bones. So you might want to bring an extra jacket.

Most of the first act takes place onboard a large ship, which is on an expedition to the coldest region of the Earth. The crew is tasked with learning what became of a previous expedition, that never returned home. We are introduced to the mismatched rescue crew, and tensions soon begin to rise as we quickly realize that most of the individuals on the ship are not psychologically compatible. One particularly rowdy shipmate named Marlowe (Ricardo Freitas) even tries to blackmail a rich occupant called Gideon (David Lenik) into allowing him to profit from his expensive drawings of the expedition. Naturally, that doesn’t end well.

These opening scenes are particularly tense, as Steeds clearly establishes the tensions between the crew members throughout their long voyage. It should also be mentioned that the ship is named the Innsmouth. The film is filled with plenty of other on-the-nose Lovecraft references, with The Mountains of Madness even being referred to by name at one point. But these nods will probably be lost on more casual viewers.

After being forced to make an impromptu landing, the crew quickly decided to explore a nearby system of caves in order to locate their missing quarry. There they find themselves besieged by hideous fish creatures, which we learn are named Ichthyoids. It was also revealed in the talk after the FrightFest screening that only a very small number of Ichthyoid costumes were actually used throughout the production. So the filmmakers deserve credit for realistically convincing us that swarms of the creatures were lurking in the caves.

The vast majority of Freeze takes place within the cave system, and Steeds clearly used the narrow tunnels and dark exteriors to optimize feelings of dread and suspense. The exterior shots of the frozen Arctic plains will also have viewers shivering, although you need to overlook the very obvious CGI image of the ship which appears in the background during these scenes.

Most of the cast is also in top form, and Rory Wilton deserves particular credit as the unyielding Captain Roland Mortimer. His character struggles against all odds to complete his mission and to keep his men safe, while also refusing to yield in the face of adversity. Mortimer is even willing to put the lives of his crew members before his own, making him an admirable leader with an enviable sense of determination. Johnny Vivash is also memorable as the ship’s medic, who remains loyal to his captain even after some of the other men begin to have doubts, while Beatrice Barrilà got in on the action as Carmen, a gun-toting stowaway who blasts any Ichthyoids she encounters all the way to Hell.

Mortimer does eventually succeed in locating a member of the previous expedition, who also happens to be his old friend, William Streiner (Tim Cartwright). Unfortunately, Streiner has clearly been driven mad, and we are treated to some memorably unhinged monologues as he rants about how the Ichthyoids are destined to usurp humanity. Streiner’s obsession with returning to civilization with the Ichthyoids forces Mortimer to take desperate measures in order to prevent his old friend from fulfilling his evil goal. This has the viewer wondering if they would take similar action against a friend if presented with the same situation.

It seems like almost every horror film being released these days was influenced by Lovecraft to some extent. But Freeze stands out from the crowd by capturing the gradual feelings of isolation and hopelessness which made the writer’s work so haunting to begin with. Apologies in advance for the bad pun, but this is a movie that will freeze viewers to the bone. Needless to say, Lovecraft enthusiasts will find Freeze to be a harrowing and uniquely memorable experience.