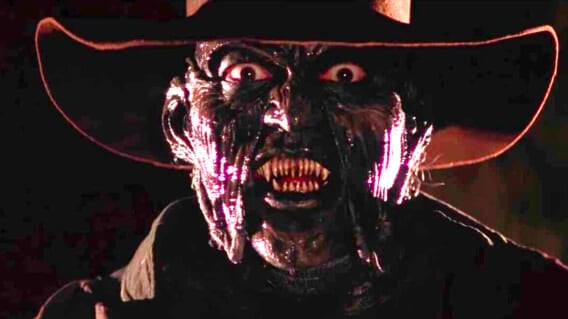 Jeepers Creepers is a popular horror franchise spawning over 20 years, four films, and a passionate fanbase. But this community has become increasingly divided as public awareness surrounding its creator’s disturbing crime continues to rise.

Starting today, the new true crime podcast Jeepers Creepers Unseen attempts to unearth this controversial franchise by reviving its past, contextualizing the harm perpetuated by the creator, and taking an honest look at why so many fans refuse to let this series of films die.

The first episode of Jeepers Creepers Unseen premieres today on the DREAD Podcast Network via Development Hell. Subscribe to the Development Hell podcast so you never miss an episode.

For every horror title to hit V.O.D, countless others end up D.O.A. Development Hell is the podcast usually dedicated to unearthing these cursed horror productions — to find out what went wrong — and decide if they still stand a shot at the green light. Make sure to check out past episodes including Neill Blomkamp’s Alien V, the cancelled Hellraiser reboot, and Freddy vs Jason vs Ash! Development Hell is a proud member of the Dread Podcast Network