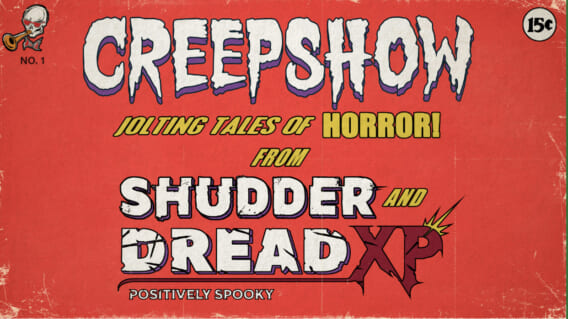 The world of Creepshow is about to get even spookier with the help of DreadXP, Dread Central’s sister site! Together with AMC Networks, they’re producing a video game based on Shudder & Cartel’s iconic horror anthology series Creepshow, based on George R. Romero’s iconic 1982 film and executive produced by Greg Nicotero (AMC’s The Walking Dead) and Cartel Entertainment. In collaboration with AMC and Cartel Entertainment, DreadXP’s game will bring the hit series to an interactive format in 2024 across multiple platforms, featuring the twisted talents of several renowned independent video game developers. The Mortuary Assistant developer Brian Clarke (DarkStone Digital) will act as Creepshow’s creative director.

“As massive fans of Creepshow, we are so excited to collaborate with AMC, Shudder, and Cartel Entertainment to bring that world to an interactive medium,” said Patrick Ewald, Managing Partner and Producer at DreadXP. Ted Hentskchke, Head of Dread XP Productions and Producer added, “The game will represent an expansion of our tremendously successful collaboration with Brian Clarke, whose expertise in crafting lore-rich narratives and clever scares makes him the perfect creative director for the project.”

“The Creepshow brand continues to spread its monstrous wings,” said series showrunner Greg Nicotero. “Hot on the heels of the Skybound Comic release this summer and wrapping post-production on Season 4, I feel like this is an opportunity to celebrate the genre with horror fans around the world in a way that takes us through a myriad of experiences.”

“I’m extremely excited to be a part of such a fun project. I’ve always loved Creepshow’s format, and the idea of driving the cohesion of multiple perspectives on horror is really compelling to me,” said Brian Clarke, Creative Director. “I feel honored to have been asked to be a part of this. I can’t wait to jump in and bring the best I can to such a great IP.”

“Shudder’s Creepshow is in a class all its own — a genre-bending mashup of spine-tingling horror and rib-tickling satire that not just any game publisher could successfully bring to life,” said Clayton Neuman, VP of Games at AMC Networks. “But after playing the Dread X Collection game anthologies, and seeing Brian’s twisted genius at work in The Mortuary Assistant, we knew we had found the right partners for this project. This game will surprise, delight, and terrify Creepshow and horror fans alike, and we can’t wait for players to get their hands on it.”

DreadXP’s Creepshow video game will retain the iconic franchise’s anthology horror format, consisting of multiple self-contained horror stories that cross gameplay genres and tone. Several independent developers popular in the horror development scene are contributing to Creepshow, including DarkStone Digital (The Mortuary Assistant). A full list of developers working on Creepshow will be announced at a later date.

Additional details about DreadXP’s Creepshow will be revealed in the coming months.