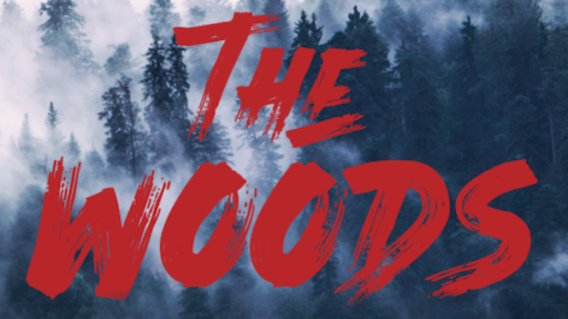 There’s a plethora of spooky things that call the woods home. Werewolves. Trolls. Bigfeet. Axemen. Alienators. Crazy Ralph. And that’s not including all the very real dangers, like bears and Shia LeBeouf. When it comes right down to it, nature can be a dangerous place! Not the most profound statement I’ve ever said, but it’s true nonetheless.

Filmmaker Kavan Mulvey understands the perils that lurk beyond civilization, and has decided to make a movie about what may prowl in the dark shadows cast in America’s rural forests. He promises all the classic dangers attributed to backcountry thickets: paranoia, bloodthirsty monsters, and trees… so many trees. That said, let’s get lost in — The Woods!

“A group of young college adults decide to try and reconnect by going on a camping trip together in the woods at their local quarry. Strange things begin to happen throughout the night and eventually something sinister comes to ruin their camping trip.”

First things first, this film isn’t in production yet as the crew is still waiting for its Kickstarter to finish, with plans to move forward with the flick later this year. It’s an ambitious project, but given the team Mulvey pulled together, I’m confident they can make it work.

Mulvey’s a recent graduate from the NYU Tisch School of the Arts Film Program with a movie already beneath his belt — the no-budget film, Dead Vision (distributed by Troma Entertainment). Doing the makeup/SFX for the feature is the sister-duo, Courtney Wise (who also acts in the film) and Kenzie Wise (a graduate from Tom Savini’s Special Make-Up Effects Program). Taking up the mantle of cinematographer is Joey Iuvara, a freelance photographer who worked with National Geographic. Rounding out the cast is Christopher McMurchy, Ezekiel Lowe, Kara McMurchy, and Riley McMurchy.

Y’all can support its production by donating to its Kickstarter here! I’ll keep y’all posted on the film. As usual, once I know something, you will.