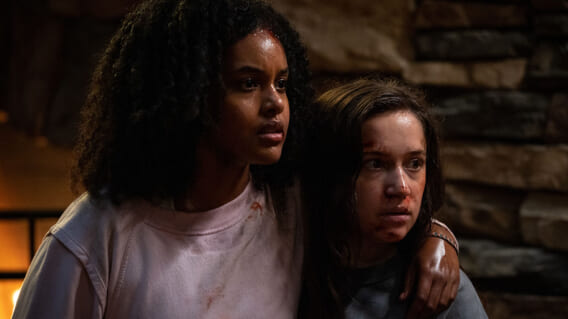 Fans of the slasher genre can set their alarms for Sick, a startlingly effective return to form for Scream screenwriter Kevin Williamson. I caught this relentless home invasion horror flick out of TIFF where it earned a four-star rating from Dread Central. Directed by Black Summer creator John Hyams, Sick is a scary and violent slasher set purposefully during the very early days of the COVID-19 pandemic. In the film, Williamson and co-writer Katelyn Crabb use this period to cleverly isolate and butcher its already lean ensemble.

I had the opportunity to chat with the Scream scribe and Black Summer creator about their forthcoming collaboration. Together we discuss urban legend horror, Momo, Scream, Stephen King, Halloween, and I even get some insight into Kevin Williamson’s next directorial effort The Audition.

Kevin Williamson: It’s really basic for me. I think our home is where we’re supposed to be safe. It’s our safe haven. It’s where we go to shut out the world. And when the world invades it, that’s just a very unsettling and scary idea. It’s a scary thought and I hate it. I have had home invasions. They’re not fun. They’re scary as shit.

DC: Do you have any favorite horror films on the subject?

JH: The Strangers, I think, is really strong.

KW: Well, The Strangers had a couple of iconic moments that you just can’t wipe away in your memory. They’re just there with you. Liv Tyler, when she’s in the house, and they just appear behind her. And those masks are so scary. But yeah, that one moment comes up all the time. When we were editing [Sick], we were talking about that moment. Because it’s so scary.

JH: I also think Michael Haneke’s Funny Games is one of the most chilling movies ever.

KW: That one is scary.

KW: I also thought the remake was fairly good.

JH: Absolutely. And in each one of these cases, the scariest thing is that there is no obvious motivation.

KW: It’s the motive, the “why” of it all, which is what is so terrifying about this stuff. The original motive behind Scream was that it was fun. And then the studio felt like they really needed a motive. So we went back and added the motive about the …

KW: Yeah, the mom. But it was still about the fun. It was both.

DC: Cautionary tales are a theme in Sick. Do you have any favorite urban legends?

JH: I have young daughters right now, and for some reason, all the kids are all swept up in Internet legends. So there’s this one they’re constantly talking about. Are you guys aware of Momo?

KW: Who the hell is Momo?

JH: She’s a really freaky-looking image of this kind of haunted, scary individual who shows up on the web and basically drives you to suicide. I think that’s the idea.

JH: Slenderman’s similar to that.

KW: So, gone is the day of the man with the hook-hand scraping on the door of the car?

DC: If you could turn a classic urban legend into a film, what would you pick?

KW: I’ve gone through so many of them actually trying to come up with one to turn into a movie. But I do have one. It’s not a very well-known one. The Legend of La Lechuza. It’s about an owl witch woman from Latin American culture. It’s a scary one because she goes deep into the bushes, into the trees, and there she cries like a baby. Whimpers just like a baby. So the person who hears her feels the need to help. And that’s how she gets you. It’s a trap.

JH: That’s a good one. The one that I’m thinking of has been made and done in many ways. Then Stephen King turned it into a short story. The Boogeyman.

JH: There was something about The Boogeyman legend. It was something you joked about. And then Stephen King used it in Night Shift. As a kid that one absolutely terrified me. I was talking to my older brother about this recently. And he says, to this day, he still leaves his closet door shut at night when he goes to bed because of that freaking Boogeyman story. There’s something about the story that just activates your imagination. You don’t exactly know what he is, but he comes out at night, out the closet door.

DC: That’s a great one. So, you brought Black Summer to audiences.

DC: Did you know that Stephen King is a huge fan?

JH: We did know because he tweeted it. It was pretty much the most exciting thing that could have ever happened to me.

KW: Why is that show not coming back? It’s a no-brainer for me.

JH: I know, I know… It had to do with regime changes at Netflix and its executives.

KW: My household binge-watched it.

DC: How did you guys start collaborating?

KW: I saw Alone and then I looked up who directed it. I loved Alone so much. I thought it was just such a real ride. I loved the way it was just over one night, this woman running for her life. (to John) I think I told you, the thing I loved most about it is I was that I was emotionally connected to it.

DC: So much modern content is ignoring the pandemic. What do you think of that creative choice?

KW: We use a title card. We wanted everyone to go back to that very first few days when we were wiping down our groceries and searching for toilet paper. And I wanted to take everyone back to that moment and tell a story that was always supposed to be a period piece.

JH: To me, the themes of this film explore not just COVID in terms of the disease, or a sickness. It’s about how we reacted to it. And it was really about the kind of hysteria that followed all of that. Because in a sense it’s a cautionary tale. It’s how we behave.

KW: We have a design where there are only two characters. One who’s an incredibly responsible pre-med student. And then you have Harper, who is, as we learn, a little irresponsible in her response to COVID protocol. And without judging, the story is basically saying, ‘What would you do in this situation? What is right, what is wrong?’.

DC: What movies scared you the most growing up?

JH: Alien was the scariest movie I ever saw at that time. I love The Shining, I love The Exorcist, I love Texas Chainsaw, Rosemary’s Baby, all these things. But for some reason, I felt like Alien was the one that gave me the most physical experience as a kid. So for me, somehow the first Alien is still to this day the scariest movie that I ever saw.

DC: Is there anything we can know about your next film, The Audition?

KW: Oh, it’s a fun thriller. It’s my take on the wealthy. It’s about a young girl who once again has to become Ripley in order to save the day. A young actress who gets hired to play the long-lost daughter of a billionaire. She needs the money, and she does it, and it all goes wrong. A little bit of a Ready or Not vibe because she gets in over her head.

Are you excited to check out Sick when it’s released? Let me know on Twitter via @joshkorngut.