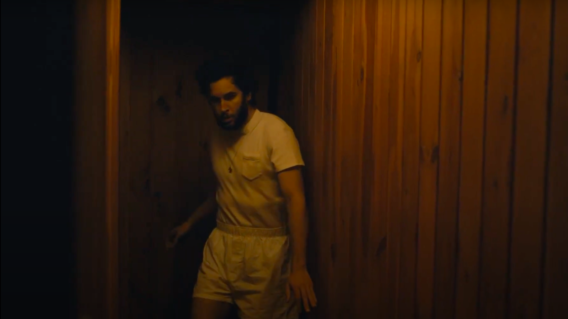 Has anyone ever gone on a nice relaxing couple’s trip to the woods only to have it crashed by your brother? Better yet, has that brother then proceeded to somehow change your perception of reality? No? Well, the young couple in To the Moon sure have. Actor-turned-director Scott Friend’s directorial debut is a trippy take on the uninvited guest trope with a dash of trauma thrown in for good measure.

To The Moon follows Dennis and Mia, a young couple who find their weekend retreat becomes a hallucinatory nightmare when Dennis’ estranged brother Roger arrives and begins to distort their senses.

Curious? We have an exclusive clip from the film that highlights just the tip of the reality-breaking iceberg awaiting you:

The film is described as:

A dysfunctional family study by way of psychological, psychedelic thriller that plays out under the weight of addiction and takes its three leads to darkly funny lows, the film takes the trope of the uninvited house guest and turns it into a metaphor for the fallout of trauma on the relationship between a young couple.

Scott Friend and Madeleine Morgenweck star as the young couple at the center of the film. Will Brill, who starred in the indie horror hit The Eyes of My Mother, rounds out the To The Moon‘s cast.

To The Moon comes to digital platforms on Tuesday, September 20, 2022. The film will also have a one-night engagement special screening on Monday, September 19th at Nitehawk Williamsburg in Brooklyn, New York.