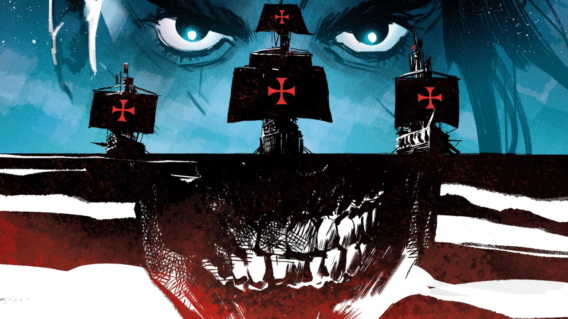 In an exclusive interview with Dread Central, horror author Stephen Graham Jones revealed that his upcoming comic Earthdivers is set to become a TV series through 20th Television, part of Disney. He shares the news over a month before the release of the first issue of the comic. It’s slated to hit shelves on October 5, 2022. IDW Publishing is releasing the comic series.

Read the full synopsis for the series below:

Earthdivers is an unforgettable and thrilling series that unites four Indigenous survivors in an apocalyptic near future as they embark on a bloody, one-way mission to save the world by traveling back in time to kill Christopher Columbus and prevent the creation of America. Earthdivers explores the staggering forces of history and the individual choices we make to survive it.

Jones is known for his horror novels that tackle Indigenous issues and pay homage to horror of the past. His latest novel, My Heart Is A Chainsaw, is his own take on the slasher genre. Now, he’s moving into the world of comics, where his horrific words can come to life on the page. The first issue alone showcases the brutality of what’s to come in Earthdivers.

Jones didn’t reveal any info more about the series, but check back for more about Earthdivers as Dread Central has it.