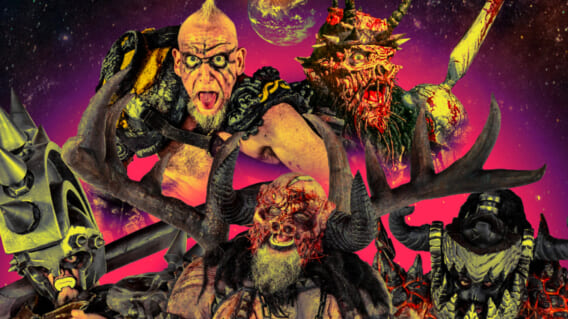 Who are GWAR, you ask? You know the name. You know the image. But you don’t know their vast, goopy origins. Their story is carved across the history of this hopeless planet, but GWAR themselves are not of this world. Their story begins far past Uranus, in the deepest reaches of space. Far off where the beings known as GWAR were warriors in the Scumdogs of the Universe, an elite fighting force in the army of the Master of All Reality.

But they proved too reckless and powerful, and after a series of tragic but hilarious blunders, they were banished to the furthest reaches of the galaxy, with orders to conquer an insignificant backwater prehistoric mudball known as the planet Earth. Now their story is told through a legendary new documentary.

Subsequently, This is GWAR is the powerful story of the iconic heavy metal art collective, as told by the humans who have fought to keep it alive for over thirty years. The feature documentary, now available on Shudder, includes interviews with the band members, both past and present, and other artists, including Weird Al Yankovic, Thomas Lennon, Alex Winter, Bam Margera, and Ethan Embry, including never seen footage of legendary GWAR frontman Dave Brockie (Oderus Urungus).

Check out our interview with GWAR member Bob Gorman:

Lastly, are as you fascinated with this group as we are? Will you be checking out the incredible new documentary This is GWAR now that’s streaming on Shudder? Let me know on Twitter via @joshkorngut. I’m always around to chat about all things GWAR!