This ‘Are You Afraid of the Dark?: Ghost Island’ Exclusive Clip Will Lure You In [Video]

Do you hear that? 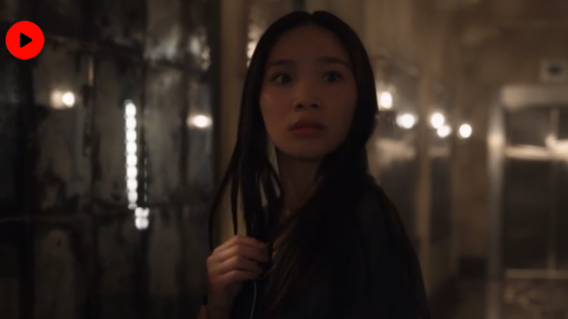 We couldn’t be more excited about Nickelodeon’s Are You Afraid of the Dark?: Ghost Island, the third chapter of the beloved horror anthology miniseries based on the ‘90s kids’ cult classic. To tide ourselves over until Saturday’s premiere episode, we’ve landed a very spooky exclusive clip to keep our spirits high. The ghostly scene is from “The Tale of Room 13″. In the episode, four best friends get more than they bargained for and encounter genuine terror locked away in one of the rooms after checking into a hotel on a resort island. Check it out below!

Are You Afraid of the Dark?: Ghost Island follows an all-new Midnight Society as they go on what they thought would be a fun summer vacation on a resort island, until they learn about something sinister haunting the guests. We here at Dread Central have been big fans of the new series since it resurfaced in 2019, and we can’t wait to experience the mysteries of Ghost Island as they unfold.

The limited series will debut with a two-hour episode on Saturday, July 30, at 7 PM (ET/PT) on Nickelodeon, with the remaining episodes airing Saturday, August 6, and August 13, at 7 PM (ET/PT). In the second half of the premiere episode, “The Tale of the Teen Spirit,” the cast try to enjoy summer vacation, until they are pulled back into the mystery of the island’s ghosts, ultimately leading them to a terrifying and shocking revelation.

Check out this scary exclusive clip from Are You Afraid of the Dark?: Ghost Island:

The new members of the Midnight Society are: Kayla, played by Telci Huynh (Modern Love, Drama Club); Max, played by Conor Sherry (The Terminal List, The Devil You Know); Leo, played by Luca Padovan (You, School of Rock the Musical on Broadway); Summer, played by Dior Goodjohn (Head of the Class); and Ferris, played by Chance Hurstfield (A Million Little Things, Good Boys). Julian Curtis (Wish Man) also stars as Stanley Crane, the hotel manager at the island resort.

Lastly, are as you as excited to check into Ghost Island as I am? Let me know on Twitter via @joshkorngut. I’m always around to chat about all things Are You Afraid of the Dark?