‘The Relic’ is a Taut, Claustrophobic Creature Feature With One Nasty Monster [Watch] 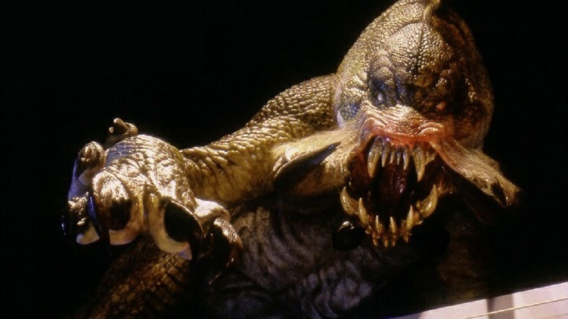 It feels strange to be covering The Relic on The Overlook Motel. At one point, this flick was a pretty big deal. It enjoyed a wide release, was well-liked by Siskel and Ebert, and features a somewhat notable cast for its era. Yet, somehow, 25 years on from the picture’s release, it has been largely forgotten by the masses. So, here we are, gearing up to look back on this taut, atmospheric horror-thriller.

The action in The Relic starts as the staff at The Chicago Museum of Natural History are gearing up for an exhibit delving into superstition in its various forms. When a shipment of cargo from an abandoned vessel finally makes its way to the exhibition hall, a security guard is mysteriously beheaded. However, the police believe they’ve located the culprit. So, they make the decision to greenlight the museum to stage a grand opening gala for the new exhibit. But, of course, the culprit turns out to be alive and well. Homicide detective Vincent D’Agosta (Tom Sizemore) must team up with evolutionary biologist Dr. Margo Green (Penelope Ann Miller) in an attempt to thwart a mysterious reptilian monster with an appetite for grey matter.

While a museum may seem like a peculiar setting for a horror picture, The Relic uses the space perfectly. The film was shot on location at The Field Museum of Natural History in Chicago. Those wide-open spaces work as a fitting backdrop for a film about a creepy-crawly creature that sneaks up out of nowhere. As the action gets going, it starts to feel like the walls of the massive building are beginning to close in.

Equally effective are the scenes that take place in the (very real) network of subterranean tunnels located below the streets of Chicago. The concept is used to great effect in The Relic. A handful of claustrophobic moments set below the surface see characters running around the ominous expanse of underground passages, ratcheting up the tension further.

When the proverbial shit hits the fan, the entire museum locks itself down. This leaves all of the guests of the opening gala at the mercy of a very hungry creature. That works well for tension building, as well as intensifying the already present sense of claustrophobic panic.

Director Peter Hyams (Timecop, Stay Tuned) further accentuates the tension by taking the less is more approach. We see very little of the monster as the tension builds to a boil. In fact, we don’t get a good look at the grotesque creature until well into the third act. So, the approach gives the viewer a chance to conjure something absolutely horrifying in their mind.

Also Read: 10 Early Aughts Slasher Movies You May Have Forgotten

While we do eventually see the antagonistic creature in all its glory, the beast is often shown in brief glimpses to avoid taking away from its mystique. The snarling, vicious beast is beautifully rendered by effects genius Stan Winston. While we don’t see an exceptional amount of it prior to the final moments of the film, the creature is impressive and a feat of practical effects work.

All in, The Relic is an atmospheric effort from an underrated director. If you’ve slept on it, I hope you will give this satisfying creature feature a chance. It is streaming on HBO Max as of the publication of this post.

Lastly, if you’re a fan of under-seen cinema and are keen to chat more, you can find me on Twitter: @FunWithHorror.