The 10 Most Upsetting Horror Movie Endings, According to Ranker 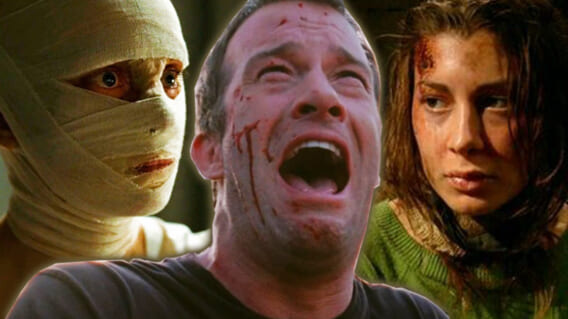 The weather is getting nicer, and spirits are higher now that summer has finally rolled in. And this just won’t do. So, to help counter-balance this onslaught of joy, we’re digging into horror movie endings purposefully structured to ruin your picnic. Today we’re taking a peek at Ranker’s list of the most upsetting endings in the history of genre cinema, and some of these bad boys are out for blood. Warning, there are heavy-duty spoilers ahead.

The number one movie to grace Ranker’s list of brutally upsetting endings comes as no surprise. The Girl Next Door is based on a novel of the same name by horror literary legend Jack Ketchum. The book was inspired by the true story of Sylvia Marie Likens, an American teenager who was tortured and murdered by her household and other members of her Indiana neighbourhood in 1965. In the film, young orphans Meg and Susan are taken in by a sick group of monsters who ultimately torture Meg to the point of no return. She endures a glimmer of hope near the end, only to succumb to her wounds. Meg’s last words to a kind neighbour are “it’s what you do last that counts.”

Coming in at number eight is a very different type of tragic horror. Night of the Living Dead could be considered one of the most influential horror films ever made. It practically created the zombie genre, essentially crafting it into what we still have today. But what separates this film from the pack is how it spoke to serious issues like segregation and police brutality fifty years before most other films. Unfortunately, the ending to this classic is extremely upsetting. The police murder the film’s lead character Ben (Duane Jones, Ganja and Hess) after finally surviving a night of truly maddening horrors. It’s completely unjust and leaves you floored.

Here the top ten most upsetting horror movie endings, according to Ranker:

Possibly the most quintessential bummer ending in horror history slides in confidently at number three. Frank Darabont’s adaptation of Stephen King’s novella The Mist is a relentless bottle film that’ll rob you of your sleep well before the ghastly ending even appears. Maybe it’s the Oscar-worthy performances by Marcia Gay Harden and Thomas Jane, but this nightmarish Stephen King movie is one I doubt you’ll ever forget. And that godforsaken ending will leave you in a puddle of tears, mark my words. Stephen King has even been on record saying he prefers the ending of the film to the one in his novella. But I dunno… it’s too rough for me.

Lastly, what do you think? What’s a horror movie that inarguably deserves a spot on the aforementioned list of brutally upsetting endings? Let me know on Twitter via @joshkorngut. I’m always around to chat about all things horror!

Share:
Tags: Night of the Living Dead The Girl Next Door The Mist