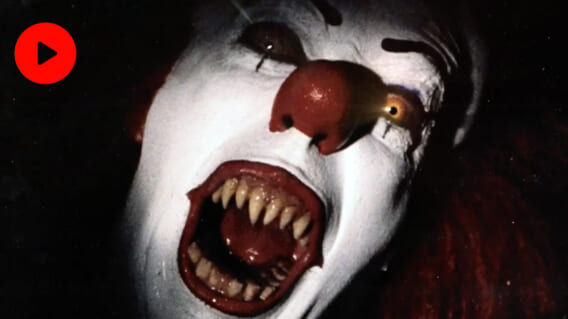 Get ready to float, because this summer IT returns … and it’s real hungry. We’re excited to announce that the brand new horror documentary Pennywise: The Story of IT, an in-depth look at the 1990 mini-series based on Stephen King’s novel, is headed to select theaters, VOD, and Cinedigm’s horror streaming service Screambox next month.

The doc saw its World Premiere at the Sitges International Fantastic Film Festival in Spain (!) before arriving in the US where it premiere at Panic Fest last month. Pennywise: The Story of IT will open in select theaters beginning July 8 before releasing on VOD and Screambox on July 26.

Twenty-seven years (plus a few more) after its release, the popular two-part miniseries IT and its infamous killer clown continue to haunt the dreams of horror fans everywhere. Pennywise: The Story of IT, which is co-helmed by John Campopiano (Unearthed & Untold: The Path to Pet Sematary) and Christopher Griffiths (Leviathan: The Story of Hellraiser), captures not only the spark the IT saga created when it was released but also the lasting impact it has had on an entire generation and the horror genre at large.

The documentary also features a ton of archival footage as well as never-before-seen content. In addition to releasing on VOD platforms such as InDemand, DirecTV, DISH, Apple, Amazon Prime Video, Google, Vudu, and Xbox, the documentary will debut on Cinedigm’s horror streaming channel Screambox on July 26.

Watch the trailer for Pennywise: The Story of IT right here:

Lastly, what did you think of the exclusive trailer for Pennywise: The Story of IT? Will you be checking out this horror documentary when it’s unleashed laster this summer? Make sure to let me know over on Twitter via @joshkorngut. I’m always around to chat all things Stephen King!