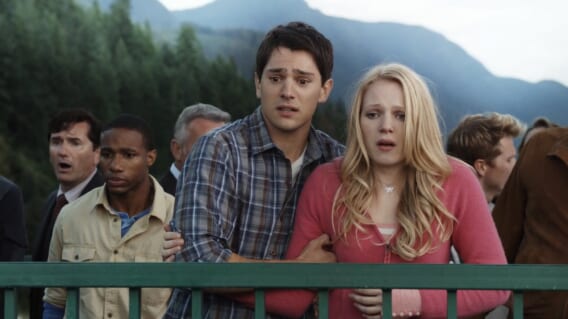 Sure, Stranger Things is out this weekend. But Netflix has so many more horror sights to show you. The streamer has quite a few gnarly genre films available, from gory remakes to goopy rape-revenge stories. If you’re looking for a movie full of buckets of blood, piles of flesh, and nihilistic endings, this is just the list for you.

The 2009 Friday the 13th remake earns a spot on this list for many reasons. But the main one? In the opening scene where someone is cooked alive in their sleeping bag. What a way to die and what a nasty kill. As far as franchise remakes go, this Jared Padalecki-star vehicle is a brutal and worthy interpretation of the horror classic.

Speaking of brutal reinterpretations of horror classics, I’d also like to tip my hat to the 2003 remake of The Texas Chainsaw Massacre. Director Marcus Nispel was able to capture the dirty and sweaty aesthetic of the original, but with his own twist that wasn’t just trying to copy and paste what we’ve already seen before. Meat hooks pierce spines and Jessica Biel is forced into a mercy killing. Also, despite your feelings for Netflix’s recent Texas Chainsaw reboot, there’s no denying it lives up to the word “massacre.” I mean the bus scene alone earns a reward for carnage.

If you’re looking for something a little different from franchise films, may I suggest Julia Ducournau’s debut feature film Raw? Props to Netflix for snagging this nasty French cannibal horror when a young woman’s sexual awakening comes with a voracious appetite. Our main character sinks her teeth into raw chicken, her sister’s finger, and so much more. It’s vicious and a perfect embodiment of female rage.

Here are the 10 nastiest films streaming on Netflix right now:

Look, I know that Gerald’s Game is mostly tame in the gore department. But that degloving scene alone earns it a spot on this list. That image of Carla Gugino just ripping her hand through that handcuff is seared into my cerebellum. As always, thank you Mike Flanagan for the hand trauma.

Which of these movies on Netflix are you watching this weekend? Let me know over on Twitter @mbmcandrews, I love to talk nasty horror!