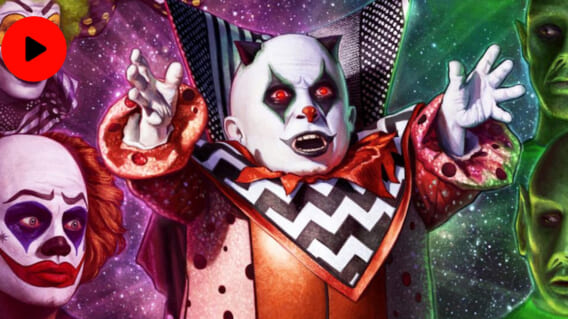 Are you a fan of outrageous cult mayhem? How about the undeniable madness of Forbidden Zone, the Richard Elfman sci-fi-camp cornucopia starring Danny Elfman? Then you’re in luck, because next month sees the arrival of Aliens, Clowns & Geeks, the latest vision of insanity from filmmaker Richard Elfman.

That’s right, actor/director and creative multi-hyphenate Richard Elfman now returns with his latest zany comedy, Aliens, Clowns & Geeks. This out-of-this-world adventure sees out-of-work actor Eddy Pine (Bodhi Elfman) stumble upon the key to the universe and get twisted up in an intergalatic war between killer clowns and sneaky aliens.

The film is being released on DVD and Blu-ray on June 7, 2022 and its special features include behind-the-scenes interviews with cast and crew, a new interview with Richard Elfman, and a music video from Mambo Diabolico, the surrealist musical collaboration between Elfman and the legendary Ego Plum.

The soundtrack consists of all new original music from Oscar-nominated composer and Oingo Boingo frontman Danny Elfman and Ego Plum.

Watch the trailer for Aliens, Clowns and Geeks right here:

Lastly, are you excited to check out the zany madness of Aliens, Clowns, & Geeks when it hits on June 7th? Let me know over on Twitter via @joshkorngut. I’m always around to chat all things Elfman (Jenna included)!