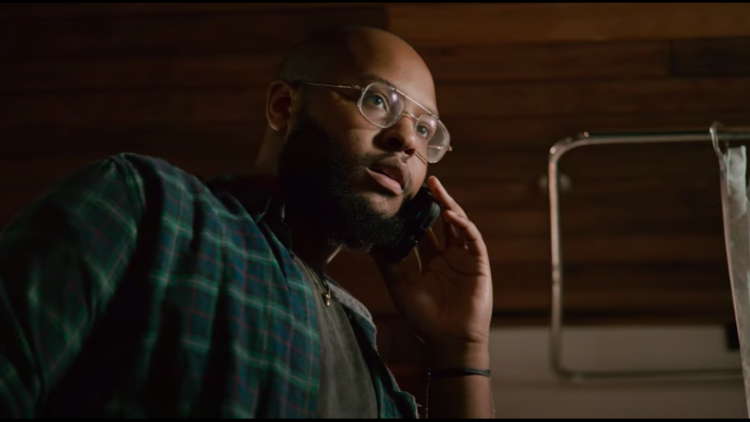 Horror is full of well-worn tropes that genre fans have come to expect. From doomed sexually active teens to the tried and true jump scare, we’ve seen it all. But some of these tropes aren’t so harmless, particularly the expectation that a horror film’s token Black character will be killed first. It’s no secret that horror is a white-dominated genre that treats people of color like props, or worse. That’s why filmmaker Daniel Foster made his short film Don’t Die First.

The short takes place in a call center where two employees, Monica and Craig, field calls from Black people who realize they’re in horror movie situations. These callers are also the only Black person in a group of white friends. They call in to prevent their untimely demises and provide the details of their circumstances (i.e. seance, cabin the woods). In turn, Monica and Craig consult their trusty binder full of solutions to ensure the caller’s survival. Notable advice includes staying close to a white girl, don’t grab any weapons, and don’t fuck with ghosts.

While Don’t Die First is a comedy, Foster strikes a more serious tone with the film’s ending when a caller isn’t experiencing something supernatural. Instead, he’s being unnecessarily harassed by a white woman who calls the police on him. Here the short turns horrifying as Monica and Craig are helpless against the real terrors Black people face on a daily basis.

Dread Central spoke to Foster about his inspiration for the film and why it’s such an important topic to tackle in the genre.

Dread Central: How did the idea for the film come about?

Daniel Foster: Don’t Die First was an opportunity to explore the horror genre from a Black perspective. Our goal was to create a plot structure that allowed us to explore the different horror genres from creature features to slasher and [comment] on all the ways characters could avoid dying. For a long time, Black characters infamously would die first in horror films. We felt it would be a unique opportunity to create a world where a service exists that specifically helps Black people avoid dying first. This comedic take evolved after the events of summer 2020 and allowed us to explore deeper themes of race and what is truly scary for people of color.

Our goal in making the film was to offer a different perspective on a serious topic. We wanted the film to have moments of comedy, before shifting to the serious tone of the final act that explores what truly haunts people of color in real life. We wanted to have our audience reflect on the real-life horrors around us, by contrasting it with the comedy of the more fantastical scares.

What’s your relationship like with the horror genre? Did that relationship feed into your inspiration for this movie?

Foster: I have been a horror fan since I first saw an alien burst out of John Hurt’s chest. I am a huge fan of Mike Flannagan, Sam Raimi, Tobe Hopper, Karyn Kusama, and so many more modern filmmakers working today. To be honest, it’s rare that something non-horror is playing on my tv. This love of the genre greatly influenced my direction for the short. I wanted to utilize as many horror references as possible to help build out the world of Don’t Die First. My co-writer Greg Griffin and I wanted to show a small glimpse of a movie already underway via the different phone calls. We wanted to utilize visual references to classic films such as Evil Dead, The Strangers, The Ring, Candyman, and The Conjuring movies in order to quickly establish to the audience what we were satirizing.

What horror films did you take inspiration from for this short?

Foster: One of the big inspirations for the film was the documentary Horror Noire on Shudder, which examines Black people’s relationship with horror. We wanted to further explore that idea in a way that was comedic and spoke to the real-life horrors of today. Another influence was Scream. We were inspired by its meta tone and wanted to homage the opening scene in our [first] call. Several other film references can be seen throughout the short. If we had a longer run time, we would want to expand on the work and homage more horror genres that we weren’t able to in Don’t Die First.