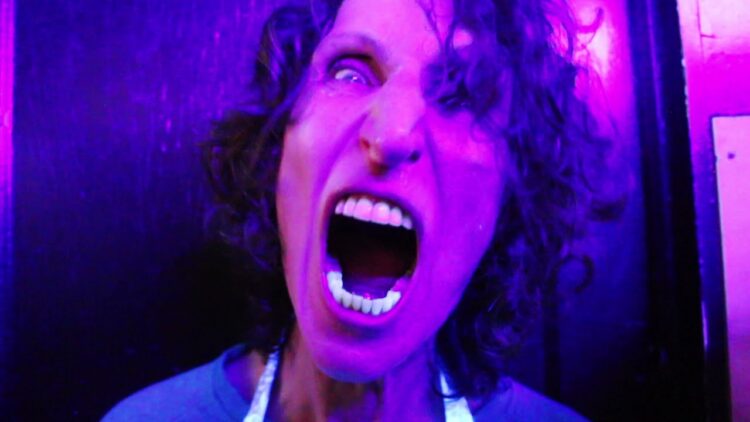 Krsy Fox’s brutal new film I Live Alone has a new trailer that teases a bloody nightmare. The funny yet scary ride stars Bonnie Aarons (The Nun, The Conjuring 2) and Nyaling Marenah.

Aarons plays the paranoid and reclusive Aunt Len who has chosen to live in solitude for over 40 years due to her delusions. But, Aunt Len is pushed out of her comfort zone when her estranged sixteen-year-old niece Parker (Marenah) comes to live with her. Parker realizes fairly quickly that something may be very off with her aunt as Len rants about the dangers of people in the outside world. Then, their neighbors start to go missing, and screams ascend from the basement. It doesn’t take long before Parker confesses to her boyfriend that she believes Aunt Len is a serial killer. Things only escalate from there, building into a twist that will leave you shocked and terrified to your core.

Writer and director Krsy Fox said, “When I began developing the story for I Live Alone I knew I wanted to touch on the judgment of people who choose to live their lives in solitude. They are often considered crazy or people think there’s something wrong with them because they live outside the norm. But I began to think perhaps they actually see things more clearly without the distractions. I knew I wanted Bonnie Aarons to play Aunt Len from the beginning. I knew her approach and intensity would be different than any other actress I could cast. Aunt Len is a strange but endearing character and it’s a delicate balance to bring her to life. Bonnie did it perfectly.”

She went on to discuss Marenah’s performance in I Live Alone. Fox said, “When [Marenah] first read for me she really brought in the feeling that she was an old soul. Her character has been through a lot in her short life and her emotions and vulnerability are very powerful in this film. My DP Andy Patch and I did a lot of pre-production discussing the shots and tone. This film is paced in a way that you can never truly feel relaxed, there’s always a strange tension.

Fox also spoke about the use of practical effects in I Live Alone. She said, “When it got into the effects and gore we really wanted to make them count. Everything in this film is practical. When we have a death scene we build it until it’s almost unbearable to watch. Our SPFX artist Ashley Stansbury went above and beyond to make it as gross as possible. I tell people I Live Alone is by far the strangest film I’ve ever made. I love the characters, and there’s nothing like a film with a crazy twist in the end. If you want to see people completely lose their mind and violence like no other, I Live Alone is the film for you! And it’s just in time for the holidays, a great outlet when the family is driving you crazy!”

I Live Alone comes to VOD on December 21st through Gravitas Ventures. You can also preorder the film on Apple.