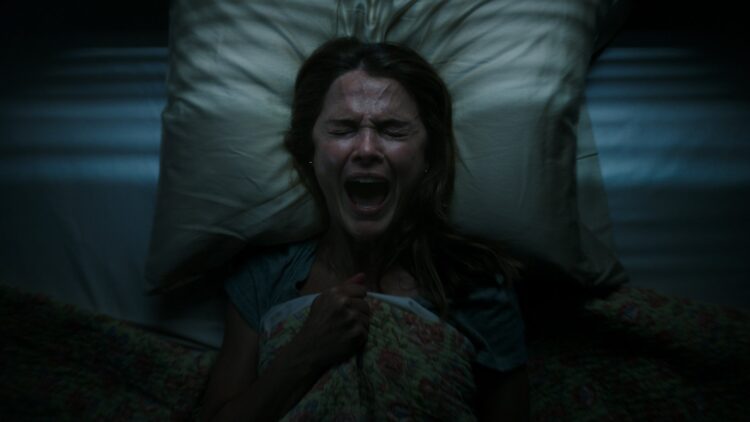 Scott Cooper’s latest film Antlers is a harrowing experience. It’s an emotionally heavy story about trauma, family, and decay. This is ultimately a tale about the horrors human beings are capable of, even with the inclusion of the Wendigo, a pillar of Indigenous belief and folklore.

The film, based on the short story “The Quiet Boy” by Nick Antosca, takes place in a decaying Oregon town. Julia (Keri Russell) has returned to her hometown and taken a job as an English teacher in the local school. But when one of her students (Jeremy Thomas) begins acting strangely, she uncovers a harrowing secret.

Dread Central sat down with Cooper to discuss how he crafted the Wendigo, working with Keri Russell, and just how she is his own version of the iconic Ripley.

Dread Central: How are you feeling now that Antlers is finally hitting theaters and coming out, everyone can finally see it?

Scott Cooper: Yeah, well, I’m really excited. It’s certainly been a very long time. I’m thankful that the studio stood by their word and they understood that this was a big-screen experience and that horror’s best experienced communally.

And even though it’s a very difficult kind of gauntlet of films around us, I just hope that people eventually will find their way to finding Antlers and I’m so eager.

Well, I love the original short story, “The Quiet Boy”, which is a great seed for this film.

Guillermo del Toro approached me and he said, “Your last three films had been horror films, but nobody knows it. Would you ever consider directing a horror film?” I said, yes, because my earliest film experiences with my older brother taking his too-young brother to see films that he shouldn’t be seeing. So I’ve always loved the genre.

I’ve made drama with some music with Jeff Bridges. I’ve made a gangster film and a Western that I felt it was time to make a horror film because, for me, I think I want to be on unfamiliar ground with each film. Because artistic risk is one of the great pleasures of making art.

What was that like? To have Guillermo del Toro approach you? To be a part of Antlers? What an incredible experience.

I certainly feel blessed. I wouldn’t have made this particular horror film without Guillermo because he’s such a wonderful director of creatures in the way he brings them into the universe. And as we were creating this Wendigo, it was really great. As I was writing the script, he was always very available and always very generous with his time. And was a really terrific experience all around.

If you’ve seen my film that preceded this, which was a Western called Hostiles that Christian Bale starred in. It dealt with Native American issues and our 400-year mistreatment of Native Americans. So their issue is really important to me. And of course, the Wendigo is folklore from Native Americans and First Nations. Antlers was an opportunity for me to help tell their story again and also work with the foremost authority on the Wendigo in the United States Grace Dillon who’s a professor at Portland State. As I was writing the script and we were creating our version of the Wendigo, she was always involved. When I was shooting, she came to the set. So it was really important that I got that right.

Our version of the Wendigo is always, first and foremost, a spirit. For me, it was the spirit of lonely places in a town like Cispus Falls, which kind of stands in for the issues that people would rather not confront.

It’s a monster that reflects our own demons and feeds off of our worst potential. And I wanted it to feel like it came from the Earth’s core. It has this exoskeleton that looks like the earth and these embers that fall off as it moves and infect people. So, that was really the process from inception all the way through completion. It was largely practical, but then we had some CGI elements. I’m thankful that it all came together like this.

What was it like working with Jeremy Thomas, who plays Lucas? I think he’s incredible. And Antlers is his first movie, correct?

Yeah. He isn’t an actor. I don’t know that he’s ever even seen a film camera. I saw about 900 boys all around the world and I didn’t want a kid who came camera-ready, who could smile or cry, or was directed by his parents or an acting coach. But I wanted a real boy, a real child. He felt like he could live in a lonely town and he felt haunted. He gives such a soulful performance for an actor of his age or quite frankly, any actor.

Keri Russell is an incredible force in this movie as well. And so what was it like to work with her on this one?

Well, she’s always been one of my favorite because she’s so relatable, never a false moment in any of her work. She’s also very strong, but can play vulnerable. She reminded me of a version of Ripley in Alien, which is one of my favorite horror films. I wanted to continue that kind of strength that Sigourney Weaver possessed in that film. Truthfully, largely, my films are male-driven: Jeff Bridges or Johnny Depp or Christian Bale, now three times. And I wanted to have a strong female at the center of Antlers. Keri is certainly that.

I’d love to hear more about her as Ripley and your thought process behind that.

Well, Alien is one of my favorite films and here you have Ripley who kind of paved the way for everything that arises in this film. You get a sense that she’s dealt with something in her past. Clearly, we understand the generational trauma. Sigourney gave such a grounded, incredibly realistic portrayal in a film that also dealt with the supernatural. And I wanted that for our Julia, with Keri Russell. Someone to who the audience could immediately relate.

The audience can also understand her pain and her trauma, as she sees a young boy kind of going through something similar in his life. And just how vulnerable she is. It felt like Ripley in Alien was a great parameter for us.

Yeah. And, I would actually also love to hear how you created Julia’s character out of the short story, because they’re very different.

I really write for actors. I wrote Crazy Heart for Jeff Bridges. I tailored Black Mass for Johnny because we’d never seen him that way. We’d seen him largely as Jack Sparrow. And then I wrote Out of the Furnace, Hostiles and my new film for Christian Bale. So I tend to write for actors.

I look at their body of work and their strengths and also how their weaknesses can become their strengths. And again, Keri, in looking at five seasons of The Americans, never gave a false moment in five years. That’s remarkably difficult to pull off. And again, someone who is so composed, but at the drop of a hat can feel the burden that she’s carrying can essentially break her at any moment. So she’s able to play that as well. She’s also someone who, male or female, is a conduit who can take you through this story. You relate to her. What’s most important for me is, if I can see myself in my work, others will see themselves. And she, and Jesse Plemons took me through that.

Do you want to direct another horror movie?

Oh yeah. In a sense. I mean, the film that I’m about to start shooting with Christian Bale deals with a young Edgar Allen Poe, who, as we know is the godfather of heart fiction.

Would you ever do another creature feature?

Oh sure. Yeah. As long as Guillermo is involved. And I will certainly make another horror film. It may not have a creature, but I will continue to hold up a mirror to America’s fears and anxieties.

Antlers is now playing in theaters.