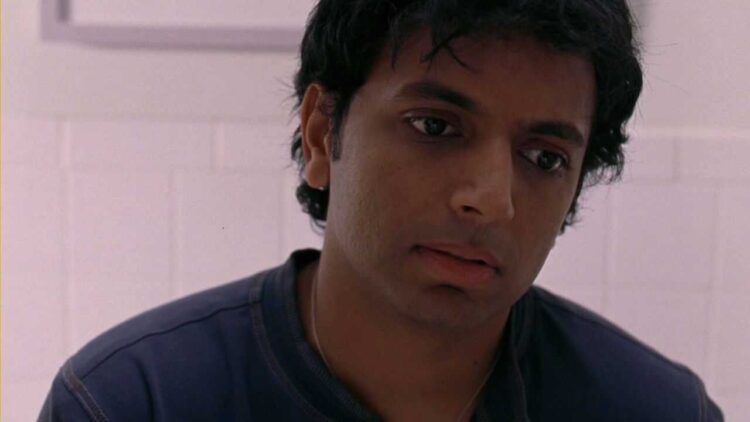 Looks like we won’t be growing Old before we get to see the next chapter in the M. Night Shyamalan universe.

The always mysterious M. Night Shyamalan took to Twitter on Wednesday to reveal that his next film will be titled Knock at the Cabin. Not much is known about M. Night’s next offering, although the title seems to tease a spooky route for the hit-and-miss auteur.

More news about the film also spilled onto Twitter Wednesday, as we learned that Knock in the Woods will be moving from February 17, 2023 up a couple of weeks to February 3, 2023. Not huge news, but it’s better than the project moving backwards. (Or losing it from the calendar altogether.)

Knock at the Cabin will see M. Night Shyamalan continue playing in the Universal sandbox after delivering hit after hit for the studio over the past decade. His last four films, Old (2021), Glass (2019),  Split (2017), and The Visit (2015) were all successful Universal studio joints. The director started off under the Blumhouse banner after spending a good amount of time in director’s jail for critical flops like The Happening and The Last Airbender.

Hits and flops combined, M. Night Shyamalan has accumulated over $3.3 billion dollars at the global box office for Hollywood over the course of his lengthy career. Shyamalan’s second film, The Sixth Sense, was a breakout for the creative in 1999 and catapulted him into mainstream success.

Shyamalan’s last feature, Old, was a quasi-return to form for the director who had recently been more focused on action-heavy chillers. Old attempted to call back to the Mystery Maestro’s earlier days when his name was synonymous with mind-bending twist endings.

The film itself is based on Sandcastle, the acclaimed graphic novel by Pierre Osar Levy and Frederik Peeters.

Lastly, what do you think of the Mystery Man? Do you think he should be treading back into the world of traditional horror a la The Visit and The Sixth Sense? Let me know on Twitter via @joshkorngut. I’m always down to chat all things M Night.