'Chucky' and 'Halloween Kills' receive an iconic mash up in this new commercial promoting both slasher entries. 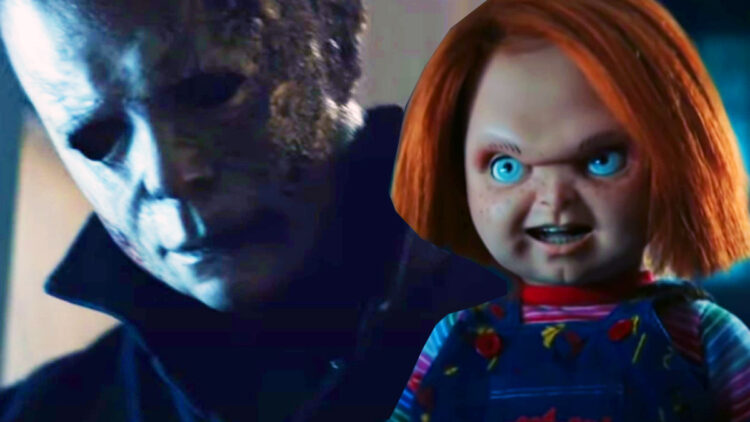 Chucky’s back, baby! But, so is Michael… and in the same goddamn week! Over the course of six months, horror fans will receive new Candyman, Chucky, Halloween, Slumber Party Massacre, I Know What You Did Last Summer, and Scream entires. What a time to be alive, am I right?

To capitalize on two of their worst-behaving boys seeing release at the same time, NBCUniversal has released a brand new commercial featuring both Chucky and Michael. What are they up to, you may be asking? Pumpkin carving, of course!

The clip starts with Chucky unsheathing a massive butcher knife with which he violently attacks an innocent gourd. Michael appears and does the same. Father/son bonding is so important. Our boy Chuck then looks up to ask, “What, you don’t like it?”

Just wait till you see whose face made the pumpkin cut.

Both iconic slashers are seeing release this week. Chucky had its first episode drop yesterday, and you can hear our thoughts about the new series here.

As for Halloween Kills, the next film will see the three Strode women join a group of other survivors of Michael’s first rampage who decide to take matters into their own hands, forming a vigilante mob that sets out to hunt Michael down, once and for all.

Lastly, how are you going to be watching Halloween Kills on release day? In theaters or via your shiny new Peacock subscription? Let us know in the comments below or on Facebook, Twitter, or Instagram! Dread Central is now on Google News.