DREAD: The Unsolved Sets Its Eyes on Loch Ness to Look for a Monster

DREAD: The Unsolved heads to Loch Ness and finds that Nessie isn't the only strange creature in and around the loch 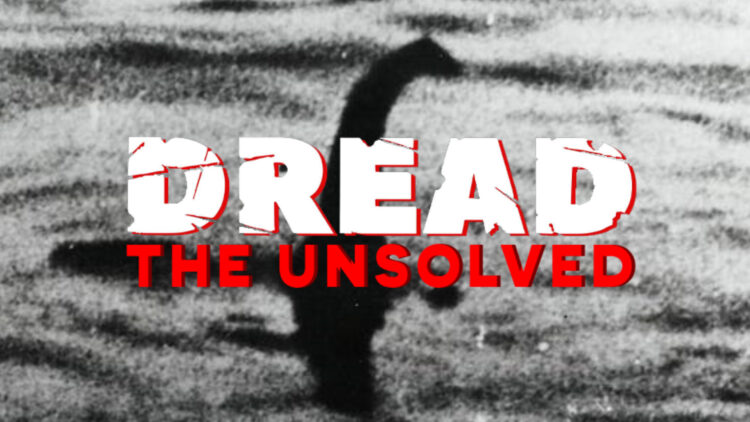 September 1st, 2021, Scotland. Richard Mavor posts drone video from his charity canoe trip across a lake in Scotland. People who watch the footage start to notice something strange in the waters of the lake. As more people notice, news outlets come knocking. What Mavor has captured is not unique. In fact, it’s been happening at the lake, Loch Ness, for over a hundred years.

The Loch Ness Monster, or Nessie, has captured the public imagination since the first widely reported sightings in the ’30s. Prior to that, a beast in the loch was written about all the way back in 565 AD. In a biography of Saint Columba, widely credited with bringing Christianity to Scotland for better or worse, a story is told wherein a swimmer was being attacked by a creature in the loch. Columba commanded it back into the loch, which it obeyed. Pre-Columba, the Pict people of Scotland had made stone carvings of a flippered creature that may have resided in the loch.

Contemporary reports describe Nessie as being between eight- to 40-feet long, with a long neck, long tail, and flippered appendages. It is described as a carnivore, surviving off of the fish in the loch.

Fast forward to 1933, and the first road offering a view of Loch Ness from up close is completed. A couple reports a large, prehistoric monster crossing in front of their car at the loch. Sightings begin to pour in. The public is rattled. The Daily Mail hires Marmaduke Wetherall, a professional big game hunter, to capture or kill the creature. He reports finding massive footprints on the beach, indicating an absolutely massive animal is on the loose. Zoologists who inspect the prints come to a startling conclusion: They were more than likely made with a hippopotamus-foot umbrella stand, a popular home décor item in the ’30s.

Related: If Genuine, New Pic of Loch Ness Monster “Easily Ranks in the Top 3 of All Time” Expert Says

In 1934, Robert Kenneth Wilson of London is visiting Loch Ness on holiday. He was looking out over the gentle waves when he reportedly saw something rise from the depths. Wilson quickly snapped 4 photos, of which only 2 came out correctly. He was insistent that his name not be tied to the photos. Thus they became known as the “Surgeon’s Photograph”. Until 1994, this photo was widely believed to be genuine proof of Nessie’s existence. That year, the Discovery channel brought the whole charade down.

Investigation of the photo found that it was cropped to obscure the size of the Loch Ness beast, implying that it was massive. In reality, professionals with the uncropped photo have said that the actual size is closer to two to three feet long. Not quite the size of a mythical sea beast. In a strange twist, someone had actually known that the photo was fake in 1975. That year, a story came out that blew open the whole case. The fake Nessie had been made by Christian Spurling, son-in-law of disgraced big game hunter Marmaduke Wetherell.

Over the years, many sonar scans have been done of Loch Ness, and while some of the findings appeared promising, overwhelmingly they’ve been shown to be misconstrued to support claims of Nessie’s existence. In the late 1980’s captain George Edwards, a regular fixture on the loch, reported an unusual finding. He found an area of the loch that was 37 feet deeper than previously charted. This area, which came to be known colloquially as Edwards Deep, spurred a new interest in Nessie investigation.

Some have claimed that because of the connection between the finding and The Loch Ness Monster, that Edwards Deep hasn’t been properly investigated. Others maintain that Edwards Deep doesn’t even exist. Actual scientists, and no tourist boat captains, point to a phenomenon known as “lobe echoes”. This anomaly can cause areas to appear far deeper than they actually are, and no sonar equipment is immune to it.

Others believe that regardless of the number of hoaxes that comes out of Loch Ness, there is some kernel of truth there. Kevin Carlyon, self-proclaimed “protector of Nessie” and “full-time witch” has made various different attempts to summon the creature from the loch. In 2001, he showed up at the loch to cast spells on a Swedish research team that was canvassing the lake with sonar, and was almost thrown in the lake by angry scientists for his troubles.

In 1973, a priest on a rowboat went out on Loch Ness to battle Nessie for the souls of the people. He performed an exorcism on the loch because he believed that Nessie was a spiritual creature, not a physical one.

So, with all this craziness, with hoaxes and witches and loch nexorcisms, is there any truth to the legend of Nessie?

There are, of course, hundreds of photographs and eyewitness accounts that haven’t been debunked. Many believe there is something out there in the loch. Be it a monster, a particularly large eel, or just a new kind of sturgeon.

But…what do you think? Is there a monster in loch ness, or just a photo op for a hoax? Let me know in the comments or on Twitter @DreadUnsolved or on Instagram @DreadTheUnsolved. I’m also on Facebook. You can send me your Nessie pics to TheUnsolved@DreadCentral.com.