Multi-Color Mourning: An Exclusive Look at ‘Dawn Breaks Behind The Eyes’

The new Mario Bava-inspired film is a tale about a couple, a castle, and shifting reality. 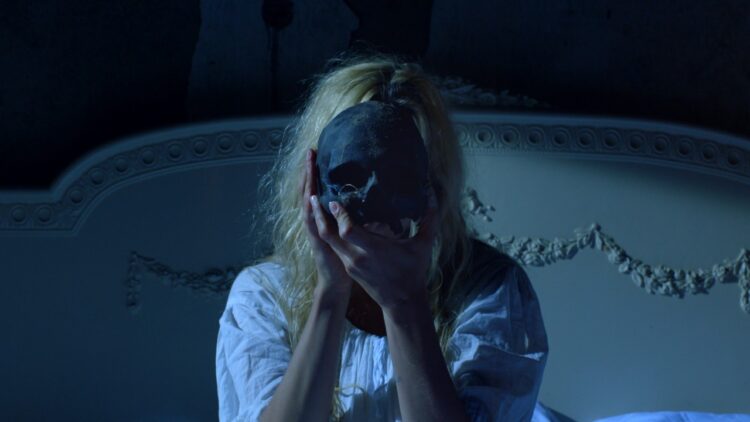 Now, if that’s not a name inspired by 70s Italian horror cinema, then I don’t know what is.

Dawn Breaks Behind the Eyes just has a nice ring to it, rolls off the tongue. I dig it.

I’m excited to say I have an exclusive for y’all gorehounds, blood babes, and everything else that goes bump in the night. This flick is still circulating around festivals across the pond (that’s Europe for those not savvy with centuries-old idioms). Luckily, director Kevin Kopacka has given me the honor of viewing it early!

Kopacka describes Dawn Breaks Behind the Eyes as “a gothic horror set in the late 60s, that tells the story of a relationship in a very unexpected way.”

Gothic horror? Late 60s? Unexpected way? Sounds right up my alley. Do you think it’s going to have some of that good ole’ wholesome Italian-flavored splattergore?

Only one way to find out! Let’s open our eyes to the break of dawn!

According to IMDb, the film is about “a couple who spend eternity in a castle until their reality starts to shift, as the unknown moves into their lives.”

So, I both had an idea of what to expect and had no idea what I was getting into at the same time with Dawn Breaks Behind the Eyes. I was told by Kopacka that the film “takes inspiration from [Mario] Bava, particularly visually, since his films were one of the first to take the gothic horror out of black and white into gorgeous color.”

Without giving too much away, he succeeded in emulating that classic Bava-style pretty damn well. The film is vivid, all matter of lighting coating its scenes in beautiful hues of blues, greens, reds, and purples.

Various shots of the old castle brim with atmosphere and offer creative transitions from one scene to the next. If each one was a painting, I’d love to have them over my fireplace, watching me during those cold nights when I like to pour a glass of wine, find a spooky book, and proceed to use the indoor heating while ignoring the fireplace entirely.

Dawn Breaks Behind the Eyes very much wears its heart on its sleeve, and the rest of the shirt doesn’t look too bad either. I was expecting all this before I even pressed play, comes with the territory.

The story, on the other hand, was a complete mystery to me. Was it going to be a giallo in the vein of Bava’s Blood and Black Lace? A creature feature, a la Planet of the Vampires? A colorful nightmare haunted by ghostly cinematography and atmospheric music, similar to The Whip and the Body? If you guessed it was the one I gave the most description to, you’d be correct.

The narrative’s dream-like aura is a constant presence, making everything feel other-worldly despite nothing too unusual happening for much of the runtime. That’s to say, it makes everything that much more effective when things really start to go down!

There’s also a particular gore scene that I just absolutely love. You’ll know it when you see it. You’ll either join me in my admiration, or add to the amount of side-eye glances I get on a daily basis.

Now, I’m not going to sit here and pretend I understood every facet of the story, but I’m pretty sure I basically got the gist of it. It’s definitely one of those flicks that’ll benefit from multiple watches. Not a bad thing at all, mind you! Especially for someone who likes to revisit films, like me.

I’m aware I’ve been vague about what the story actually is, but this is an instance where you’ll want to walk in as blind as possible. If I had to give it a label, I’d say it’s a gothic horror/haunted house flick in the style of Roger Corman’s Poe movies and Bava’s eerie 60s horror flicks, both in substance and visuals. Yes, I mentioned Corman again. Don’t worry, I’m getting to it.

If all this sounds up your alley and you have the means to do so, check out the Dawn Breaks Behind the Eyes theatrical world premiere at London’s Frightfest on August 28th! Otherwise, keep an eye out for it wherever it may pop up next. I’ll do my best to keep all who are interested updated!