‘Behind the Mask 2’: ‘Development Hell’ Uncovers The Lost Meta-Sequel

Do you still wonder whatever happened to the Leslie Vernon "spreemake"? If so, you’re not alone… 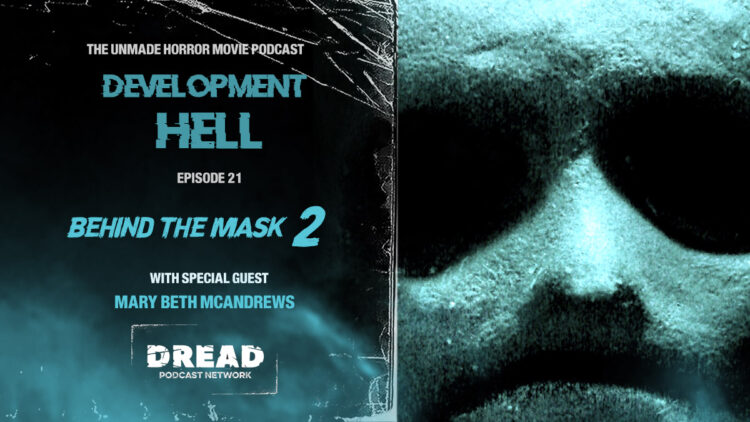 Today’s new episode of the Development Hell podcast uncovers the never-made ‘spreemake’ to the 2006 indie meta-slasher classic Behind the Mask.

In the original film, Leslie Vernon is an aspiring serial killer following in the footsteps of Michael, Freddy, Jason, and Leatherface. A team of journalists document his quest for glory with a behind-the-screams documentary on how serial killers do their job.

But not all is as it seems. While Leslie may have met a grisly finale, the never-made sequel, Before the Mask: The Return of Leslie Vernon, built upon the Vernon mythology in fresh and exciting ways.

Crowdfunding blunders, MTV pitches, television concepts… Find out what exactly happened to this ill-begotten follow up to one of the most treasured meta-slashers ever made.

Most importantly, this episode’s very special guest is Mary Beth McAndrews, Dread Central‘s content manager (and all-around horror internet celeb). She co-hosts the podcasts Scared for Life and Watched Once Never Again. She’s a true icon and has a lot to say about found footage, mockumentary, and all things horror.

Is unmade horror your type of thing? Subscribe to the Development Hell podcast.

For every horror title to hit VOD, countless others end up DOA. Development Hell is the podcast that unearths cursed horror productions to find out what went wrong, and decide if they still stand a shot at the green light. Make sure to check out past episodes including Neill Blomkamp’s Alien V, the cancelled Hellraiser reboot, and Freddy vs Jason vs Ash.

Development Hell is a proud member of the DREAD Podcast Network.