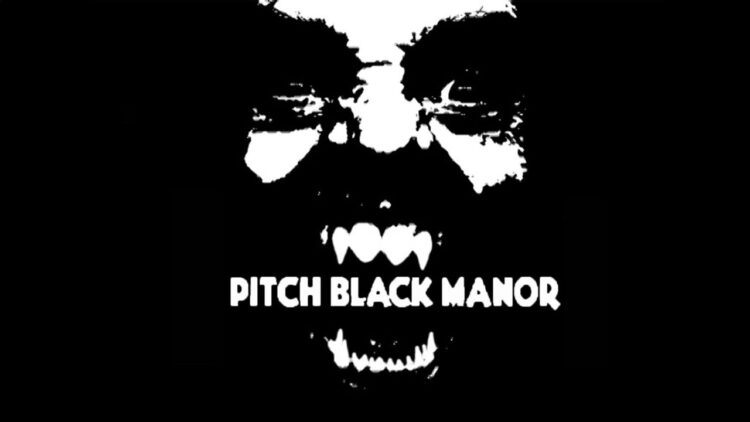 On their last album, Monster Classics, each song dealt with a classic horror monster… you know, like werewolves, mummies, all that jazz. Which I mean, c’mon, that’s rad as hell! Going Down is my personal favorite out of the bunch, dealing with Gill-Men, though I feel every song was a banger.

I’m going in blind for their next release, Night Creeps, but I’m sure it’ll make my ears bleed profusely in the best way possible.

I’m getting ahead of myself, how silly of me. Some of you might not be aware of who Pitch Black Manor are. You may not know what they’re all about, what I’m even talking about. Don’t worry, I’m here to help enlighten you!

First thing is to find out where to start… well, how about at the beginning?

Let’s start with a little backstory about the lead singer and founder of the band, Joshua Bentley.

Back around 1978-79, Mr. Bentley moved into a house in East Moline, IL situated on a bluff overlooking the Mississippi River. It was built sometime during the ‘60s by a very well-known Quad Cities’ doctor (but not too well known because I’ve never heard of him. Granted, I live on the other side of the country, so that might have something to do with it). Nothing too exciting… then came the weird stuff.

“Unexplained noises, voices saying your name, nightmares that induced panic attacks, a presence that would follow you out of the basement, and yes, even a full apparition,” Bentley reminisces, “this would come and go over my 19 year stay in that house.”

Spooky shit. Some real Poltergeist stuff going on there.

He told few about his experiences due to feeling they would be laughed off. However, in 2014 he was able to confirm that another owner had experienced the same inexplicable phenomena. Who, you ask? Why, the daughter of the doctor who designed the house! A classic horror twist for sure.

“Built on an old command dump in the 1920’s,” Bentley explains, “the property was found to have links to a supposed Native American massacre which was only whispered about in stories passed down the years.”

My bad, we’re in Amityville Horror territory, not Poltergeist. Despite all the terrifying shit happening in his home, Bentley managed to find some like-minded individuals and formed a band in said haunted house. A “haunted house band” if you will… that’s pretty hardcore.

“All the members were drawn to old school black and white horror films, Lugosi, Karloff, Price (a holy Trinity of horror personas), and a heaping dose of goth/industrial music.”

Vincent Price, eh? Good to know they have great taste!

Pitch Black Manor formed in 1990, playing their first show on July 21, 1991 out in Davenport, hosted at Uncle Roscoe’s Polo Club. In the four years after, they continued to spread their music like a flesh-eating zombie virus across the Quad Cities’ area, opening for such bands as Electric Hellfire Club and Legendary Pink Dots.

Their final show was in 1995, life having put the band into a state of suspended animation, not unlike a crashed alien in Antarctica… listen, any chance I have to reference The Thing, I’m going to take.

Then, after 25 years, Pitch Black Manor’s blood began to flow through its frozen veins, bringing it to life once again to stalk the world with its haunting melodies and monstrous lyrics in time for Halloween 2020.

As Bentley said in a QuadCites.com article, “it was time to come back to the Manor and light the fire of hope for our much beloved Halloween.”

All this brings us to now, to the debut of Night Creeps, their latest album.

From what I’m told, it’s “a gritty tale of a city gripped with unsolved murders and a mad scientist who will stop at nothing to release his minions on an unsuspecting public. Pyromaniacs, back alley black magic, and serial killers are boiling up a cauldron that the authorities are unable to contain.”

Huh, sounds like things might get a bit messy… but in the fun way… no, not that fun way. I meant blood and guts and stuff… ugh, nevermind.

Anyway, I also heard the phrases sinister synth, glittery guitars, and horror hooks being thrown around. If there’s one thing I love, it’s alluring alliteration. If there’s another, it’s sinister, glittery horrors.

After such a long hiatus, it seems the Manor is going to stay open for a bit, and I can’t wait to visit again and wander through its Pitch Black halls.

You can get the album digitally here, as well as check out their previous album, Monster Classics!