Behind the Lens: Cinematographer Ryan Purcell Discusses the ’80s-Inspired Look of THE STAIRS 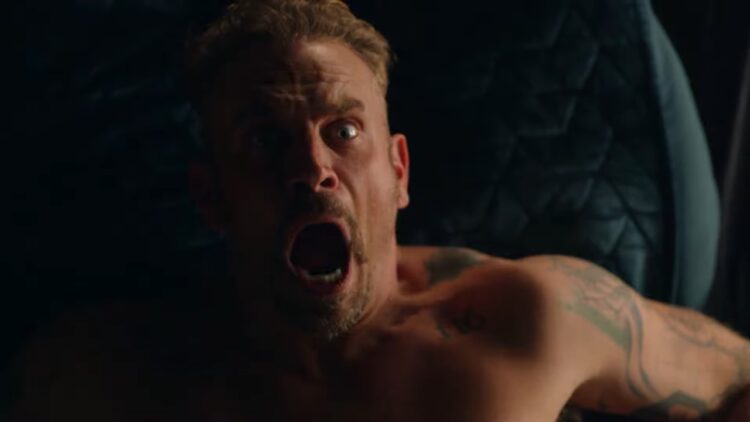 Peter “Drago” Tiemann’s The Stairs has been on the film festival circuit since last year, garnering numerous nominations and accolades such as “Best Picture” at Haunted House FearFest and the Audience Award for “Best Picture” at Nevermore Film Festival.

Cinedigm is now releasing the film in theaters on August 12th as a Fathom one-night-only event.

Synopsis:
In 1997, a young boy is out hunting with his grandfather (John Schneider), when he stumbles upon a mysterious staircase deep in the forest. The subsequent disappearance leaves locals baffled as to the fate of the wayward pair. Twenty years later, a group of hikers set off on an ambitious trail, taking them deep into a secluded stretch of woods. Overcome with the beauty of their surroundings, they are blinded to a sinister presence lurking just beyond the trees. As the mountain terrain pulls them deeper, the group unknowingly stumbles upon a long-forgotten evil and find themselves coming face to face with the thing that nightmares are made of.

The film’s cinematography by Ryan Purcell has also been praised, receiving “Best Cinematography” awards from the Horror Hotel International Film Festival and the European Cinematography Awards (ECA). We wanted to learn more about Purcell’s work on The Stairs, so we spoke to him exclusively below about everything from how he became connected to the project, to what the most complicated scene to shoot was.

Dread Central: How did you become involved with The Stairs?

Ryan Purcell: I had worked with Drago on a few different projects before we began shooting The Stairs. He was the stunt coordinator on a horror feature I shot called 7 Witches. We also did the web series pilot Phoenix Run together and that had had a very successful festival run – almost as good as The Stairs! So we knew each other beforehand which is always nice – plus the Seattle market is fairly small, and for the most part, everyone knows who is who, and who it is that is doing good work.

Dread Central: What did pre-production look like for you on this film?

Ryan Purcell: Pre-production was quick – and somewhat of a blur.  I was brought on somewhat late in the process.  They had just lost their main woods/hiking location and we were scrambling to find another spot that would work for the film. Fortunately, we found a great spot that worked both visually and for production.  The “nests” for example would never have existed had we shot in the original location. We found them while scouting the new location, so we wrote them into the script and got a creepy couple of scenes out of them.  And we also had a spot for base camp nearby, so that’s a win/win.  Of course, Drago and Jason Lowe (the co-writer) were always bringing up great shots we could have had at the original location…  I had to say “Guys!  We are shooting the movie here, forget about it!”  Eventually, they did.  I never even saw the first location so I had no regrets about what might have been.

Related Article: Exclusive Clip from THE STAIRS In Advance of Our Free Hollywood Screening August 10th!

Dread Central: The Stairs is Peter “Drago” Tiemann’s feature directorial debut. Because of this, did he want to be more involved with the cinematography? What did your working relationship look like?

Ryan Purcell: Well, one of the advantages we had was that we had worked together before.  The cinematographer and stunt coordinator relationship is very similar to the cinematographer director relationship.  We were used to talking together about shots and angles.  We already knew what each other liked and didn’t like.  I wouldn’t say we had a shorthand but when we looked at a scene we would have the same take on the best angle to shoot it from, and what coverage we might need to make it work.  But our relationship wasn’t set in stone.  The box truck scene for example was very loose. It was raining pretty hard – we could have lost the day – but fortunately for us, we had this cover set.  So I was in the box truck with the actors and Drago was radioing in instructions from a tent outside and we just worked through the coverage like that.  I think I was the driest person on set.   On the other hand, the sequence of the creature pulling Dirty Doug out of the tent was very specific, and I had been given a list of shots I had to figure out how to shoot, some of them fairly complicated given our budget.   For the overhead shot, I used an old Sam Raimi technique and bolted the camera to a couple of 8×8 rails, and then the grips walked along with us, essentially operating the camera, as we drug Dirty Doug to his demise.   So that sequence was very clear as to how it was to be shot.  Talking shots, setups, and blocking was not a foreign language to Drago, which meant we could be loose and still be confident we could get what we needed for the scene.

Dread Central: A lot of The Stairs takes place outside in the woods, which I imagine would get very complicated for lighting purposes. What was the hardest part about shooting a film in the woods?

Ryan Purcell: Good question.  And it’s always the same answer.  How do you squeeze an edge light or a backlight in there? On The Stairs, it was challenging because we didn’t have the budget for a condor or for balloons or honestly even for a proper generator/distro setup.  My big gun was a 1600-watt joker on a mambo stand which I would rip through the trees for some background and then I’d use LED panel lights close to the set where I’d try and get a “bounced moonlight” sort of a feel and maybe sneak in a backlight on a menace arm.  I tried to stage most of the scenes to face the access road where we had a small generator and where I had a few lights on tall stands that I could possibly use as an edge.  When we turned a scene around, we had some battery-powered LED’s that we drug off into the woods and tried to get some deep background lit up.  So it was tough to keep the look consistent and looking decent and not having it take forever.  And then there is the rain and the mud.  And the tiredness.  So I guess I’d say there are a lot of “hardest parts” to shooting a film at night in the woods.  I’m proud of what we got accomplished.

Dread Central: How would you describe the look of The Stairs?

Ryan Purcell: I like to keep things fairly naturalistic.  I think we did punch the colors up a bit during the day scenes and kept the night scenes in somewhat of a steely cool grey/blue. Drago and our colorist, Mark Osborne, developed the aqua look for the “underground” scenes, which I think takes it into an interesting place and adds a nice texture.  Overall, we kept a little bit of an 80’s vibe going and didn’t take the look anywhere drastic.  I had a small team, so we had to be nimble.  I kept the camera on a Dana mostly and tried to connect as many shots together as I could, so we could keep the actors in a groove.  So many scenes involved them playing off each other and no matter how short the scene was they all seemed to have a line!  So connecting some of the coverage with a little move, kept it from feeling choppy and kept a flow going.

Dread Central: Was there one scene that was more challenging to shoot than others? Can you explain why?

Ryan Purcell: The scene in the Georgetown Steam plant was pretty challenging.  Mostly because of logistics. We had to load in, blackout a portion of the set, shoot some pivotal scenes (Including the monster reveal!), and load-out all in the same day.  Loading in the gear sometimes involved carrying the gear upstairs that were really more like ladders.  All that work cut into our shooting day and I think we all wish we would have had more time there. We got the shots we needed but we didn’t get a lot of “extra” stuff. In retrospect, I should have pushed harder for a pre-rig crew but the budget and schedule did not allow it. It was a day that took a lot out of the crew.  Physically taxing.  So that was our toughest day.  There was a little bit of feeling “under the gun.”  We only had one day at that location.  So we had to get it done.  And we did.

Dread Central: The Stairs isn’t your first horror film. Do you feel that this specific genre has a different set of guidelines to follow when it comes to the cinematography?

Ryan Purcell: I don’t think the “horror genre” necessarily has its own set of guidelines.  Or it shouldn’t.  To my mind, everything depends on the story you are telling.  Midsommar looks different than The Witch.   Radically different day exteriors. They both work.  Imagine if the looks were reversed.  Neither film would work as well, to my mind.  So story first.  I do think you can be a little more expressive with your lighting when shooting a horror film.  Play with shadows more and, of course, use more uplighting!

Dread Central: You have shot commercials for Ford, Xbox, and Amazon. Besides length, what is the biggest difference between shooting a film like The Stairs, opposed to a commercial?

Ryan Purcell: The easy answer is budget, and yes, I have done feature films where the entire budget was that of a 3-day commercial – and that does create a lot of its own challenges.  But I think the biggest difference is intent.  Even in narrative films of the lowest budget, you are trying to create a work of art, and/or realize someone’s personal dream, and/or make people feel something meaningful.  And yes, sometimes some of the best commercials can sometimes make you feel something, but it’s really there to try and sell you something else.  It’s got a sneaky agenda.  A film exists to convince you of itself – of its own reality.  So that’s the biggest difference.  But I’ve always just really loved feature filmmaking; the instant family that is created on set, the journey that you take with each film as it’s made.

Dread Central: What are some of your favorite horror films? Any new ones you would recommend, besides The Stairs?

Ryan Purcell: I’ve always loved the 70’s film Burnt Offerings.  Karen Black and Oliver Reed.  How can you go wrong with those two?  The Others is another film I really like.  Great creepy atmosphere and performances.  A couple of recent movies that I enjoyed that were somewhat lower-budget affairs were Crawl and The Dark and the Wicked.  And then just last night I stayed up to one thirty in the morning because Se7en was on Showtime and I caught the beginning and I couldn’t stop watching.   Masterclass in filmmaking.

You can learn more about Ryan Purcell at http://www.ryanpurcelldp.com/.