POST MORTEM PODCAST: How Rick Jaffa and Amanda Silver Got Fired From RISE OF THE PLANET OF THE APES 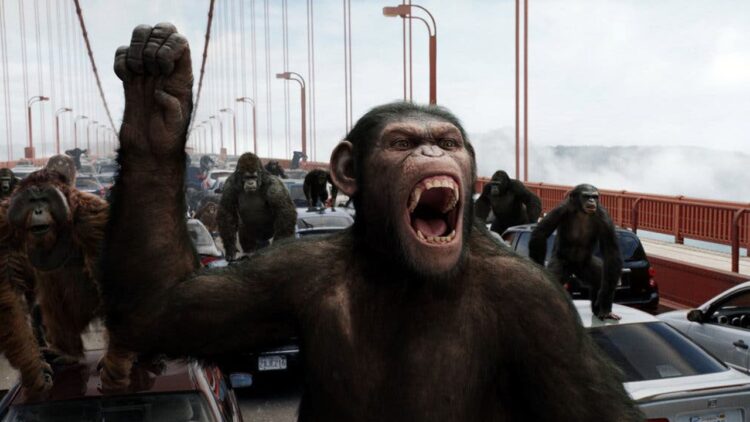 Before they were celebrated for reinventing the Planet of the Apes franchise, co-writers and producers Rick Jaffa and Amanda Silver were fired from scripting its 2011 installment, Rise of the Planet of the Apes—more than once. And as these stories too often go, the decision that would earn them the most praise was also what got them initially tossed from the project.

“The reason we were fired on Rise was that they kept saying to us, ‘You guys aren’t listening. This movie will never be told from an ape’s point of view,’” Jaffa recalls on the latest episode of Post Mortem with Mick Garris. You can listen to the full episode at the bottom of the article!

Jaffa says that he and Silver would respond by telling their employers at 20th Century Fox, “You’re absolutely right—it’s about the [James] Franco character”… before immediately returning to their mission to make the chimpanzee Caesar (played by Andy Serkis) the film’s protagonist.

Silver adds: “When you’re reading the script, the stuff with the humans is a lot less interesting than the stuff with the apes. Caesar’s in this [testing] facility and he’s dealing with the other apes, and all of a sudden the script is alive, you’re turning the pages. But that’s because Caesar is the protagonist. That’s where the juice was. And it just took them a long time to reckon with that.”

The creative partners agree that, in fairness to the folks at Fox, turning Serkis’ simian into a star “was a huge gamble.” When executives Peter Kang, Tom Rothman, and Emma Watts read Rise’s stunning climax, which pits a police squad against Caesar’s army of apes atop the Golden Gate Bridge, Silver says they feared how audiences might take it. “They kept saying, ‘Well, at the bridge, who are we gonna root for?’” she recalls.

Although their risks on Rise had yet to reap rewards, the studio eventually came to accept that Jaffa and Silver had delivered on the pitch that got them hired in the first place.

“For our pitch, we went in and said, ‘Guys, you’re just gonna have to pretend like the Tim Burton movie never happened,” he says. “For this moment in time, wipe it out of your memory. We’re starting over. And they said, ‘OK.'”