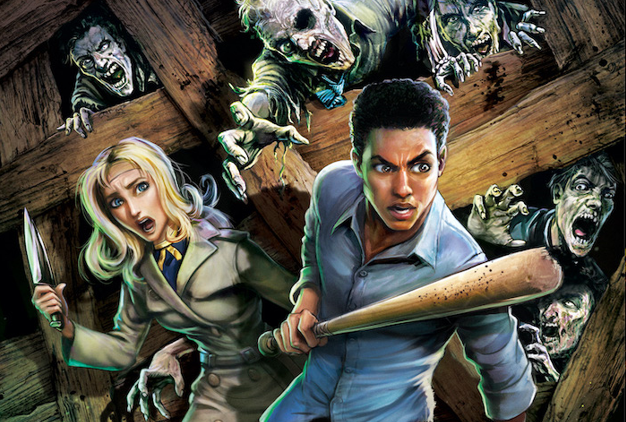 Warner Brothers has announced that their animated reimagining of the 1968 George Romero Classic Night Of The Living Dead has a release date and new box art!

Related Article: NIGHT OF THE ANIMATED DEAD Rises This Fall!

You will have the opportunity to revisit the classic cult film that redefined horror in an all-new animated reimagining. Including the star-studded voice talents of Josh Duhamel (Jupiter’s Legacy, Transformers) as Harry Cooper, Dulé Hill (The West Wing, Psych) as Ben, and Katharine Isabelle (Ginger Snaps) as Barbara. As well as many more!

In Night of the Animated Dead, siblings Barbara and Johnny visit their father’s grave in a remote cemetery in Pennsylvania when they are suddenly set upon by zombies. Barbara flees and takes refuge in an abandoned farmhouse along with stranded motorist Ben and four local survivors found hiding in the cellar. Together, the group must fight to stay alive against the oncoming horde of zombies while also confronting their own fears and prejudices.

Presented by The Long Game in association with Hemisphere Entertainment, Night of the Animated Dead is an animated adaptation of the 1968 horror classic and includes never-before-seen, exclusive animated scenes not found in the original live-action film.

This exciting feature will be released by Warner Brothers on Digital on September 21, 2021. With a Blu-Ray Combo Pack and DVD on October 5, 2021! The Blu-ray and DVD release will include several special features including

Making of the Animated Dead– Join director Jason Axinn & Producer Michael Luisi as they regale fans with the careful process of honoring the iconic classic with their vision for an animated remake, including scene breakdowns and booth recordings with the cast!

I know that I am going to need to pick up a copy of this film as a unique addition to the collection. If you have any thoughts and would like to continue the conversation, you can leave a comment below or on our Facebook page, Twitter, or Instagram. You can now find Dread Central on Google News or you can carry on the vibe with me personally on Twitter @psychobillychef.