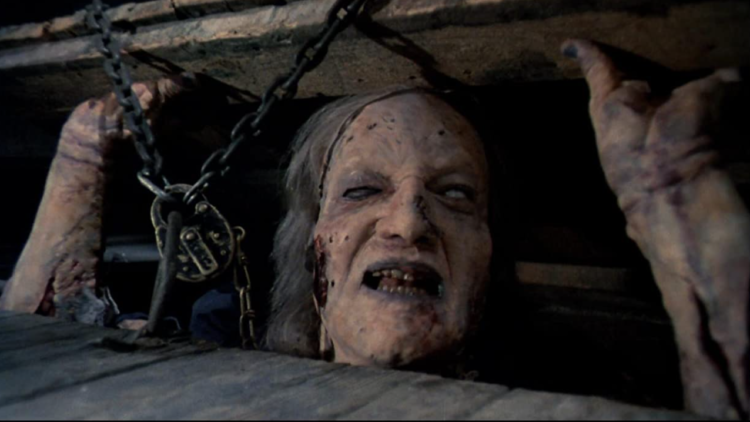 Writer/director Lee Cronin is currently on set filming the fifth film in the franchise and has been sharing photos from the set on his social media accounts. Including this newest pic of a pizza box that is an easter egg for Evil Dead 2 fans!

Evil Dead Rise is currently being filmed in New Zealand and is directed and written by Lee Cronin (The Hole In The Ground). The film is a collaboration between Warner Brothers, New Line Cinema and Sam Raimi’ Ghost House Pictures.

Bruce Campbell is not in the film as he has retired the iconic Ash Williams character but is serving as an Executive Producer along with original Evil Dead writer/director Sam Raimi and Robert Tapert. The film stars Alyssa Sutherland (Vikings), Morgan Davies (The Hunter) and Lilly Sullivan (Picnic at Hanging Rock).

Synopsis: A road-weary Beth pays an overdue visit to her older sister Ellie, who is raising three kids on her own in a cramped L.A. apartment. The sisters’ reunion is cut short by the discovery of a mysterious book deep in the bowels of Ellie’s building, giving rise to flesh-possessing demons, and thrusting Beth into a primal battle for survival as she is faced with the most nightmarish version of motherhood imaginable.

Evil Dead Rise will be released on the HBO Max streaming service, but the release date is not yet known.

I don’t know about you, but I am excited to return to the Evil Dead Universe and am stoked that we can anticipate a brand-new film a full forty years after the release of the original! If you have any thoughts and would like to continue the conversation, you can leave a comment below or on our Facebook page, Twitter, or Instagram. You can now find Dread Central on Google News or you can carry on the vibe with me personally on Twitter @psychobillychef.