These are four of the iconic actor’s most memorable genre outings. 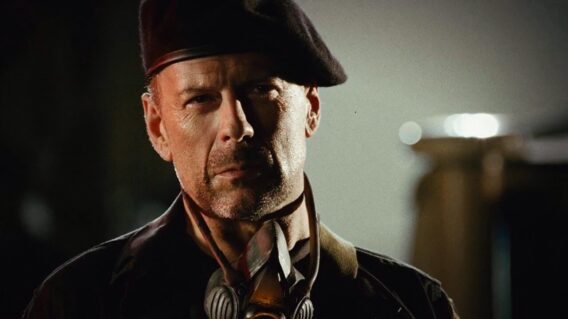 My first memory of Bruce Willis dates back to the summer of 1988, when my parents couldn’t find a sitter and opted to take me to see Die Hard during its theatrical run. Their desperation led to an epic viewing experience that would see me following Willis’ career through the highs, lows, and everything in between. And to this day, I still count myself a massive fan. Accordingly, the news that the actor plans to retire was heartbreaking. However, I take solace in the fact that Willis leaves behind him a prolific body of work, filled with memorable onscreen appearances.

Bruce Willis dazzled audiences with his turn as a ruggedly handsome, one-man ass-kicking machine in Die Hard, delivered a layered and dynamic performance as a contract killer in Looper, and demonstrated his range as a past-his-prime boxer in Pulp Fiction. However, beyond his numerable action roles, the thespian has also left his mark on genre cinema, particularly the horror genre. So, in honor of the actor’s lasting legacy, I’d like to take a moment to celebrate a few of his most memorable forays into the horror genre (and horror-adjacent cinema).

Thirty years on from the initial release of this campy farce, Death Becomes Her has become iconic to horror fans, as well as a staple of queer cinema. The gory gags and nonstop barrage of camp make this dark, horror-infused comedy from director Robert Zemeckis almost impossible not to love.

Hollywood legends Meryl Streep and Goldie Hawn play off one another with aplomb, stealing scenes left and right. But Willis does plenty to hold his own as Ernest Menville, the disgruntled, henpecked, plastic surgeon and (sometimes) husband of aging Hollywood legend, Madeline Ashton (Streep).

This loving throwback to the exploitation output of yesteryear sees Willis turning up as Lt. Muldoon, an elite military operative that (shortly after arriving on the scene) morphs into a giant pustule by way of exposure to a deadly bioweapon.

While Bruce Willis’ screen time in Death Proof isn’t extensive, he nonetheless puts his mark on the film and stands out amongst an all-star cast of characters. He brings his signature brand of macho to the role and receives a quite memorable sendoff, even without a prolonged arc.

His lack of screen time likely wasn’t mere happenstance here. It’s widely believed that director Robert Rodriguez was paying tribute to the grindhouse flicks of years past that would briefly enlist the services of a bankable star and slap their face across the poster (see image above) to boost ticket sales. However, in most cases, the big name would only appear for a glorified cameo appearance, just as Willis does here. But what a memorable appearance it is!

This atmospheric chiller from 1999 sees Willis appearing as melancholic child psychologist Malcolm Crowe. Dr. Crowe sets out to assist young Cole (Haley Joel Osment) a boy that believes he can see the dead. But we quickly learn that Dr. Crowe, in spite of dedicating his life to helping others, has plenty of his own struggles. Willis comes across as accessible and authentic, seemingly demonstrating a genuine understanding of the developing brain.

The Sixth Sense marks one of Bruce Willis’ best performances in a horror feature but also ranks as one of the top showings of his career, at large. Willis’ character is pragmatic and empathetic as a clinician. Yet he’s more stoic and reserved in his personal endeavors. Ultimately, he gives the audience fleeting glimpses of his inner turmoil. He believably conveys a sense of sorrow and loss that suggests there is a great deal that he keeps inside.

This marked Willis’ first collaboration with macabre director M. Night Shyamalan. Thankfully it wasn’t his last, as the pair would reteam the following year for the dark superhero picture, Unbreakable.

I will admit that Unbreakable may not be proper horror. Although, it is a Shyamalan film and nearly everything the director touches is steeped in horror of some sort. The tone and atmosphere of Unbreakable are dark and menacing. The film instills a sense of unease that seems to suggest something unspeakable is always lurking nearby.

Bruce Willis was a smart choice to play lead character, David Dunn. The actor has an unassuming, ‘everyman’ quality about him but his impressive physicality (circa 2000) lends itself to the idea that he could possess great strength. Accordingly, he feels like a natural fit to play a man with dormant, or more accurately, unrealized superpowers.

What I love most about Unbreakable is that it isn’t an event film. It isn’t full of explosions and CGI. It is a dark, intense, contemplative piece that demonstrates Willis’ talent in a subtle and understated way.

Due, in large part, to the worldwide box office success of Unbreakable, Willis would later go on to cameo in Split and Glass, both of which take place in the same cinematic universe as Unbreakable and serve as part of a loose trilogy.