Dae-min Park was inspired by the action and comedy of Jackie Chan movies. 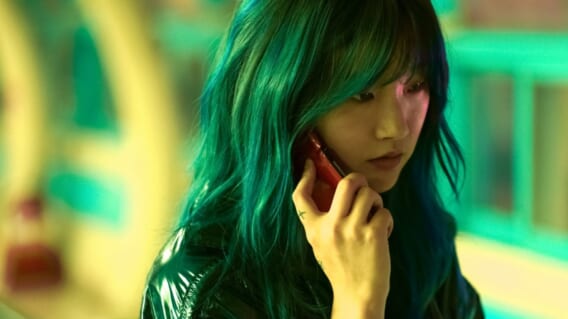 Director Dae-min Park‘s film Special Delivery is, well, special. It’s the rare action movie that features a female protagonist as an incredible driver a la The Fast and the Furious franchise. Plus, she’s played by Park So-dam of Parasite fame, who turns an incredible performance.

If you need to get a package from one place to another, and the postal service won’t touch it, who do you turn to? To Jang Eun-ha and her sketchy boss Baek, that’s who. As a sideline to Baek’s junkyard business, he brokers special deliveries—anything, anywhere, any which way. Getting there is the task of Jang, an ace driver of unmatched sangfroid. She may not be as cold-blooded as she likes to think, though. When a former baseball player lands himself in hot water with gangsters, she finds his son Seo-won in the backseat of her car, with the key to a corrupt cop’s illicit funds in his pocket and a swarm of murderous henchmen on his tail. Getting herself and the kid out of this mess—alive—will mean pushing her vehicular skills to the max, and more!

Dread Central sat down with Dae-min Park and his translator at Fantasia to talk choreographing car chases, Jackie Chan films, and more.

Dread Central: Where did the idea for Special Delivery come from?

Dae-min Park: The beginning was very simple. I wanted to make a movie where the main character is female. I wanted the story simple but very fast-paced. And I thought about what kind of actions I will show with her and what kind of profession she should have in order to show these actions. Then I thought that if she is a professional driver, then she would be able to show this speed and also overcome some physical limits.

DC: What was it like choreographing these driving scenes?

DP: So in the movie, Special Delivery, the most important thing in these car-chasing scenes for me was making some changes. And what I mean by changes is I not only wanted to show always the very high speed, but I wanted to variate the speeds. So the car runs very fast, and then suddenly it stops, and it goes slowly. And then it goes again, a very, very high speed, things like that.

I wanted to also variate the space. So sometimes the car runs on a very broad road. However, the next scene goes through a very small narrow alley. And then sometimes the cars move from the first floor to the third floor. So I wanted to variate also in terms of the height. These kinds of changes in these car-chasing scenes are, I think, the most attractive points.

And I like personally Jackie Chan’s movies, and I wanted to also get inspiration from his humorous actions. So for example, I wanted to add this humor, and also, I wanted to show that she’s very peaceful, even in this speedy and very hectic movement. So I showed that she was drinking coffee while driving.

DC: Awesome. And what was it like working with Park So-dam?

DP: She’s so passionate and enthusiastic. So it was a great pleasure and easy to work with her. She went to the gym four to six weeks before the start of the shoot. And she spent every day, three or four hours in the gym for action practicing. After we started filming, she also trained with the martial arts team separately near her hotel.

DC: Oh, cool. And then what was it like working with a young child in such a violent, high-speed movie?

DP: Hyun-jun is very childlike and very innocent. And he played like a normal child in the shooting scenes. It was a great pleasure to work with him all through the movie. And also, Hyun-jun and So-dam were already cast in the same movie, Parasite. So they knew each other and So-dam could take good care of him, always. It was a great pleasure also for them to work together. One difficulty for Hyun-jun was that, as you see in the movie, there are many scenes where we shoot during the night. And as a child, it must have been quite difficult because he should sleep, but he could not. So he was sleepy sometimes, and we should have given him more rest during the night. We tried to give him rest as much as we could.

One of the scenes he enjoyed the most was action scenes. Even though he was not really physically involved in action scenes, he enjoyed so much looking at those scenes when we were shooting them. And also, he did great in the underwater scenes. Better than other adults. Whereas because others were very much afraid of water, he wasn’t. And I think he could become a very good action star in the future.

DC: Oh, that’s amazing. What are some of your favorite action movies in general?

DP: So, as I said, growing up, I watched a lot of Jackie Chan’s movies. And I liked that so much. Also, I like True Romance, and Tarantino himself. More recently, the most impressive action film was Mad Max.

DC: Oh yeah. 100%. And so my last question is, what was your favorite scene to shoot in Special Delivery?

The most enjoyable scenes were probably car-chasing scenes. And we had all prepared in advance using 3D simulation technology. We had all these moving images already prepared for those scenes. With that, realizing these scenes on the spot with real cars, was quite interesting for me. Yeah. And also the most impressive scene that I remember in the movie was at the end of the story Park So-dam could see that her boss died. And when she saw the corpse of the boss, she was very much distressed. We could see the sorrow in her emotions and in her facial expressions. We could also see the changes in her facial expressions to express this distress. Then she got determined to fight. When I saw those changes in her facial expressions, I had goosebumps, and I really liked shooting those scenes.