The filmmaker tells us about his early exposure to horror, how Lawson made his job easy, and his new film's biggest influences, from Spielberg to Carpenter. 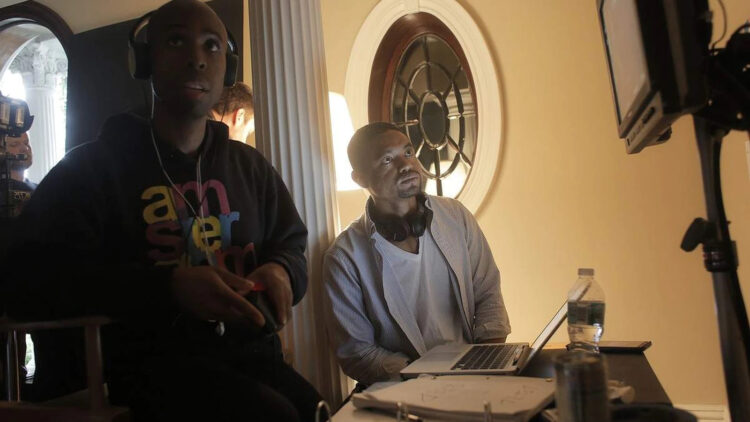 Co-writer-directors Cezil Reed (L) and Lydelle Jackson (R) and Cezil Reed on the set of their supernatural horror feature ‘Not Alone.’

One of the best parts of FilmQuest is getting to talk to filmmakers about their movies. And one of the most out-of-left-field movies of the festival this year by far was Not Alone. When I initially sat down to review the film, I quickly realized that the best way to explore this movie would be to talk to its co-writer and co-director, Cezil Reed.

Dread Central: What is your horror origin story? Was there a specific movie or moment that drew you into the world of the genre?

Cezil Reed: It starts with my Uncle Jeff, who, when I was probably five years old, showed me A Nightmare on Elm Street. That was my intro to horror movies. No bad dreams. I was more interested in the idea of watching something I should not have. But I think the origin story really started with my first time seeing The Exorcist, which was at my dad’s house when I was 10 years old. I watched it, and I should not have watched it… it messed me up until this very day! So, I’ve always had an interest in anything related to spirits, demons, things like that. I would say that’s where I get the bulk of my inspiration from, along with being brought up as a Baptist.

DC: Not Alone is so far out of left field, and nothing goes as expected for any of the characters in film. Where did your idea for the movie come from?

Reed: The idea really took off from wanting to do something unexpected—to do a flip on a haunted house movie. My writing partner and I really enjoyed movies from the 1980s and ’90s, a la Spielberg. Not Alone was an attempt to do something in that vein, and to put together new ideas that we liked that are contemporary, influenced by TV series like Stranger Things and my love for astronomy.

DC: Your movie starts out seeming like it’s another haunted house story, but then subverts expectations and becomes something wildly different. Did you set out knowing you wanted misdirect audiences in this way?

Reed: I wouldn’t say we started out knowing that we wanted to subvert expectations. But once we got to writing Not Alone, it began to seem that we did want to give the audience something that they wouldn’t expect. Typically, in a “monster in the house” scenario, the antagonist or creature is quote on quote “bad” or “evil,” and we wanted to subvert expectations surrounding that.

DC: The script uses comedy to help release tension. Can you talk about knowing when and where to diffuse tension versus when to let it ride?

Reed: You know, that’s something I’m still learning about and working on. I can only speak instinctually to the feeling that there needs to be some kind of comedy throughout, and I’m really just going off of the way the characters are and who they are. So, it’s kind of hard to say when that works and when it doesn’t. I wish I had a better answer, but I’m not sure how to answer your question because this is a really hard thing that I’m still working on: knowing when to use comedy to release tension and when not to.

DC: As you’ve mentioned, Not Alone feels very akin to the ’80s fantastical stories that Spielberg is widely known for. Did you have other influences when working on this film?

Reed: Yes, Spielberg was a very strong influence, but we were also influenced by Poltergeist, The Amityville Horror, and the films of John Carpenter.

DC: What is one thing you want audiences to take away from this movie?

Reed: If people can at least question what may be out there in the universe—that they cannot see and be open to other possibilities—I think that would be a perfect takeaway, 100%.

DC: Is there a specific moment or special effect in the film that turned out better than you hoped?

Reed: I feel the dinner scene works quite well. We put a lot of work into it, and I was always uncertain about the way that it would turn out. But I feel like it plays very well in the film, so I’m happy that it came together.

DC: What’s one question about Not Alone that you want to answer but no one has asked you?

Reed: You know, the question that I think would be a good one is: What inspired the character of Dr. James Clay? Dr. Clay is modeled after myself and two astrophysicists: Jim Gates and Neil deGrasse Tyson.

DC: Your cast includes the Richard Lawson. How did you ending up casting him, and what was it like working with this legend?

Reed: The credit for that goes to our casting director, Rose Rosen, as well as our producer Sarah Schroeder. They had Richard’s contacts that they brought to the team, and we just snatched them up as soon as we could and made an offer. Working with Richard is like the best film school you could ever want. It was a lot of fun. He’s a true professional and an incredibly intelligent actor. I found that he blew me away with the decisions he made, so I really almost didn’t need to do any work myself when directing him! I have nothing but good things to say about his work ethic and his performance in the film.

DC: Did Tina Lawson (aka Beyonce and Solange’s mom) visit the set?

Reed: Yes, she did stop by a number of times. She was a complete jewel to speak with whenever I had any time to speak with her. (Which was not much, since we were making a movie.) But I think Richard was even more happy to see her, because she came with coffee at 3 a.m. in the morning during our late-night shoots.

DC: I understand you had 18 days to shoot, and those were 12 hour days. The movie also has a lot of supernatural scenes, and those moments look like they took a lot of time to film. Can you talk about what went into getting all of this accomplished in such little time?

Reed: Yes, this process had more to do with pre-production and anything else. We had 181 scenes that we had to shoot in 18 days with actors. There was an extra day to do any pick-ups and re-shoots, as well as inserts, which we definitely took advantage of. Most of the credit has to go to our cinematographer, Marcin Szalkowski. He was phenomenal. He helped us plan out each scene with lighting diagrams. We did the blocking overheads, and we pretty much shot the movie with photos before we even made it, all during the pre-production phase. We also storyboarded a lot of scenes, which was very helpful—to know exactly what we wanted so that we could move quickly. And obviously, there was a shot list and a line script, so that we would know exactly when the shot begins and when a shot ends within each scene. That was incredibly helpful.

DC: What’s one bit of advice you’d give to aspiring writers and directors?

Reed: Directing can be lonely, but it is rewarding. And I’d say that more than anything, it’s a collaborative effort, with everyone involved truly believing that they are making the best movie possible. A director must understand this and speak from this perspective at all times.

Also, no matter if you’re the writer or the director, when you’re hired to do a project, you need to really think about the fact that you are offering a service to others. You are being commissioned to work on a movie. So, there must be humility, grace, and imagination that comes with such an endeavor.

DC: Where can people see more of your work?

Reed: Well, you can see my first feature, which debuted at Sitges in 2013. It’s called The Taking. It’s an art-house kind of experimental horror film. If you’re into that kind of wild, esoteric, and existential filmmaking, you may like it.

Reed: I’m working on a dark comedy with Richard Lawson called Old Dog. It’s about an assassin who’s shooting the wrong people because he’s going senile and has dementia.

Not Alone had its regional premiere at FilmQuest 2021.