Our very own @MarcosCodas sits down with Demonic's Carly Pope to talk about filming in Vancouver and reaching the next level in life. 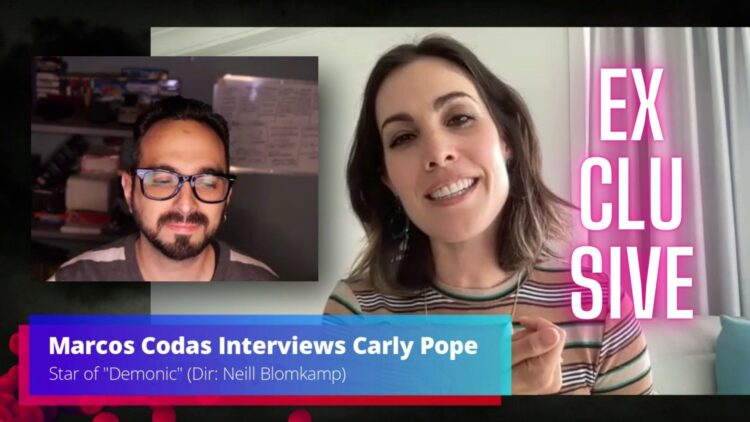 For the past half a decade, I’ve been waiting for Neill Blomkamp’s new film. Out of all the things I might have thought the pandemic would bring, this wasn’t one of them. And yet, here we are. Today, I speak with Demonic’s Carly Pope, the star of the film and British Columbian extraordinaire. We speak about her professional history with Blomkamp, her thoughts on reaching the next level in life, and the importance of bread variety at Vancouver’s iconic Japadog.

However, before we jump to the interview, here’s the trailer for Demonic:

And here’s the synopsis:

A young woman unleashes terrifying demons when supernatural forces at the root of a decades old rift between mother and daughter are ruthlessly revealed in this horror-thriller from director Neill Blomkamp.

RELATED: Demonic Review: More of an Exercise Than An Exorcism

The immersive simulation horror film uses a patent-pending new method of using volumetric capture (a three-dimensional video technology that turns actors into geometric objects.). The amount of volumetric capture in Demonic is the most ever seen in a feature film.

Without further ado, here’s my interview with the one, the only Carly Pope:

Have you watched Demonic yet? What did you think? I personally adored Carly Pope’s performance, but had my doubts about the overall film. Feel free to reach out to me on Twitter @marcoscodas to talk about Demonic, and stay tuned to @DreadCentral for anything and everything related to horror.